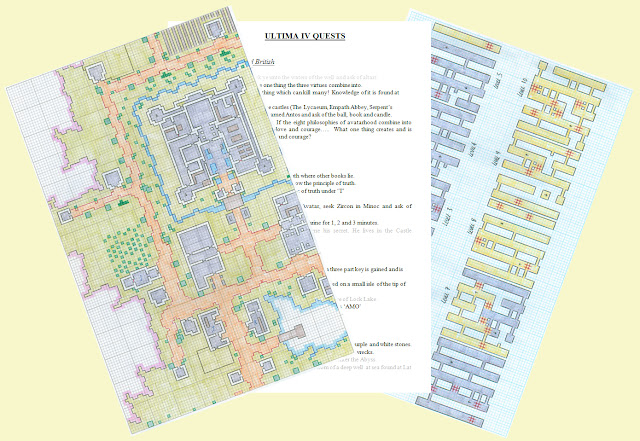 The Ultima games are a much loved series of fantasy CRPGs developed by Richard 'Lord British' Garriott through the 80's and 90's. The nine (or ten counting Ultima VII as two) games that make up the main series were split into three trilogies - The Age of Darkness, The Age of Enlightenment and The Age of Armageddon.

In addition there were several spin-offs.  Best known were the two Ultima Underworld first person RPGs.  There was also Ultima Online, a MMORPG that came out in 1997 and is still running today.  Finally, based outside the canon but utilising the Ultima VI engine are the two Worlds of Ultima games.

My experience with the Ultima series began with Ultima III which I had on the Atari ST in the mid-eighties.  It was a game I loved and religiously mapped onto graph paper.  For some reason I can't remember, I never completed it.  I then moved on to Ultima VI, again on the Atari.  I mapped all the towns and dungeons but near the end my game disk corrupted and I never had the heart to start over. I purchased the Ultima VII games and Ultima VIII when they came out but never really got into them.  At some point I bought The Ultima Collection and had an ill conceived idea to play all the games in order.  This was quickly curtailed with the awful Ultima II and to this day the original Ultima is the only one I have ever finished.

The games from the Age of Darkness don't reach the lofty heights of My All Time Favourite Video Games so I will start with Ultima IV which kicks off the Age of Enlightenment trilogy.  It was the first game in the series set in the land of Britannia and introduced the eight virtues for which the series became synonymous.  Ultima IV came out in 1985 and, as with the first five games in the series, was developed on the Apple II.  It was subsequently released on a host of other computers and consoles including the NES and Sega Megadrive.  I shall be playing the game on the Atari ST from 1987 as this is the one I am used to and contemporary DOS games usually have inferior graphics and sound (saying that, I haven't tested this one).  The Amiga version is more or less identical to the ST.  I have attempted Ultima IV a few times before so have maps and notes to give me a head start.  Hopefully my enthusiasm won't fizzle out this time and I can complete my second Ultima game.
Posted by Wingnut at 10:52