Anyhow, Final Fantasy II is set in a different world to the previous game and has a new set of protagonists.  As I can't understand a word of Japanese I installed a translation patch by Neo Demiforce and am utilising the Final Fantasy Origins manual.

You start the game by naming your party of four friends but don't get to choose their character class.  In Final Fantasy Origins they are already given names which I decided to use.  Firion was adopted as a child by Leon and Maria's parents and grew up as part of their family.  Leon is Firion's adopted brother and best friend.  Maria is Leon's sister.  Finally, Gus is not given a background but the manual says he possesses great strength is able to communicate with small hairy critters (beavers as it turned out).

The story so far is that the Emporer of Paramekia has summoned fiends from another dimension in bid to take over the world.  A rebel force was formed in the kingdom of Phin but in the ensuing battle the kingdom was lost.  The rebel force retreated to the town of Altea but the four protagonists were left orphaned and homeless.

The games kicks off with a similar looking battle screen to Final Fantasy where your characters are promptly defeated by a band of Dark Knights.


The party is found by Princess Hilda who takes three of them to Altea, but Leon has disappeared.  As you are too inexperienced, Princess Hilda won't let you join the rebellion but you are advised to head back towards Phin to search for Leon.

When you speak to NPCs they again give stock answers.  Occasionally key words are highlighted that can be memorised for use in conversations with other characters.  Completing quests changes the dialogue for major NPCs so it is good idea to revisit them. For the majority of quests NPCs are temporarily added to the fourth party slot. 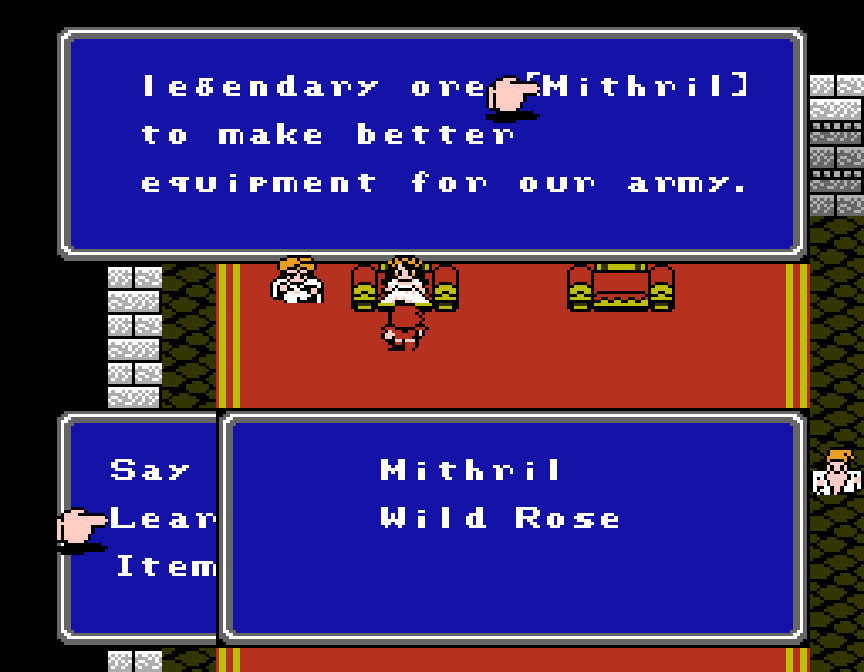 On they way back to Phin random encounters rear their head again.  The battle system looks very similar to the first game but ranged weapons have been introduced and your party can be formed into two ranks.  Only party members in the front rank can successfully attack with melee weapons.  Characters at the rear are protected from physical attacks but can be harmed by ranged weapons and magic.  Combat is turn-based and if a party member targets a monster that is destroyed or flees then that attack is wasted.  I have all my party in the front row - I want them to get hit so they gain HP....

Character development has been completely overhauled and at this early stage I am confused as to which direction to take. Character classes have been done away with and attributes are increased depending on how each character behaves in combat. For example, if a character uses a lot of spells their Intelligence and maximum MP may increase. If they use physical attacks Power may increase.  If they keep taking a beating maximum HP may increase.  Characters can also become adept at using a particular type of weapon and they level up in weapon skills the more they use it.  Not having played this game before I'm unsure of the best way to go.  At the moment my plan is for Maria to focus on using a bow and magic, for Gus to concentrate on the axe he started with (I've since found he can dual wield so added a sword), and for Firion to become a bit of an all-rounder.  The flip side of all this is that attributes can also decrease which looks like developing a well rounded character quite difficult.  Intelligence decreases when Power increases.  Vitality decreases when Intelligence increases.  When Soul increases it depletes your Power.  Sod it, I'll make Firion a fighter too.


Magic is another area that has been changed.  Each character is now given a pool of mana which depletes when casting a spell. Spells can again be bought in Magic Shops or can be found as treasure and any character is able to learn them.  As with weapon skills,  spells start at level 1 and increase in level the more you use them.  As spells reach higher levels they get more powerful, but use more mana when they are cast.

Back to the story - I found Phin was overrun with imperial forces but discovered Hilda's dying fiancé hidden in the basement of a pub.  He gave me a ring which he said will help me on my journey.  On returning to Altea with the news, I was allowed to join the rebels and then sent on my first mission to find some mithril.  I will not be writing a walk through (I can recommend Shen Nung's hugely entertaining Inconsolable blog for that)  but I will gather my thoughts and experiences below.....

I can see why the character progression system is divisive but I didn't mind it at first and got used to it quite quickly.  It became tiresome when I had to start prolonging random encounters and keep using the same spells over to level them up.  Thankfully levelling up weapons skills was easier.  In the end I developed Firion as a fighter and Gus as an unarmed ninja, both with useful spells to back up Maria who was the main spellcaster.  Having well developed characters was easier than I initially thought - even though certain stats can decrease, the net effect is an overall increase, although Firion ended the game as a simpleton.  I found the game much harder than Final Fantasy with more full party deaths - getting through the Empire's airship and Dist Cave during the game were particularly tough, as was Jade Passage/Pandemonium at the end.

I must mention the bestiary here as the developers did away with most of the enemies from the previous game.  The few that have returned have different artwork. Lot's of other developers I can think of would re-use graphics and monsters when doing a sequel. The game world is a different story with a lot of the tiles carried over from the previous game, however the graphics still look good for the NES so I have no complaints there.  Most of the music in Final Fantasy II is quite pleasant and varied too - only the battle screen tune, which returned from the first game, really started to grate.  I found the plot thoroughly enjoyable, though there was a lot of back-tracking to pick up the next quest.  I have to admit that towards the end I was willing the game to be over as it was starting to get repetitive.  Nearly all the quests involve travelling to a dungeon, retrieving the quest item therein, and returning to Altea or Phin to find out where to go next. Random combats were also getting annoying and monotonous.  That said, Final Fantasy II is still a great game and was worth playing.  I'll be interested to see if Square can come up with something fresh for the third and final title on the NES.  Hopefully the quest and levelling system will be given a major overhaul or Final Fantasy III might not appear on this blog.

I don't mind a game that doesn't take itself too seriously.... 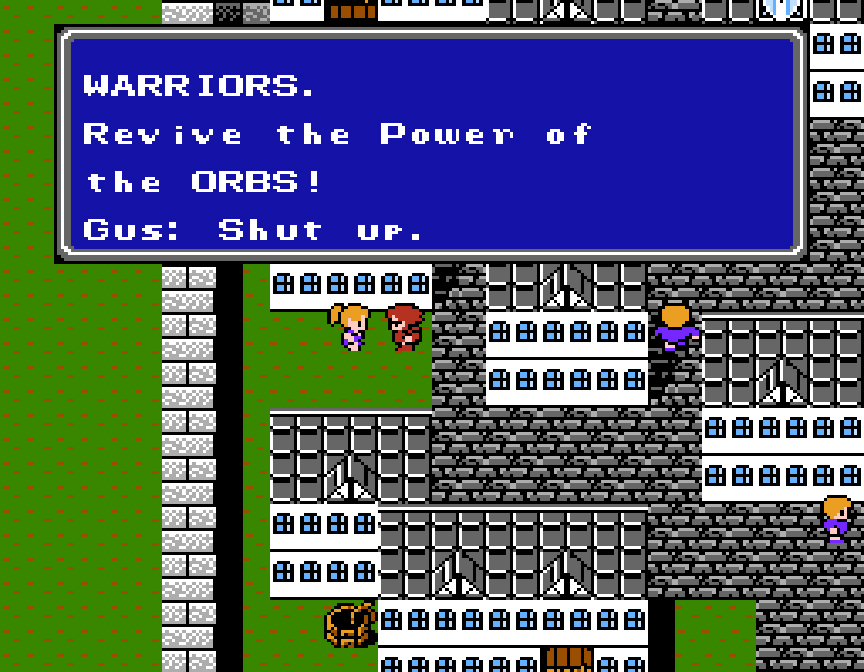 Getting eaten by a Leviathan was an excuse to add yet another 'dungeon'.  Obviously linear, at least you could only head toward the mouth.... 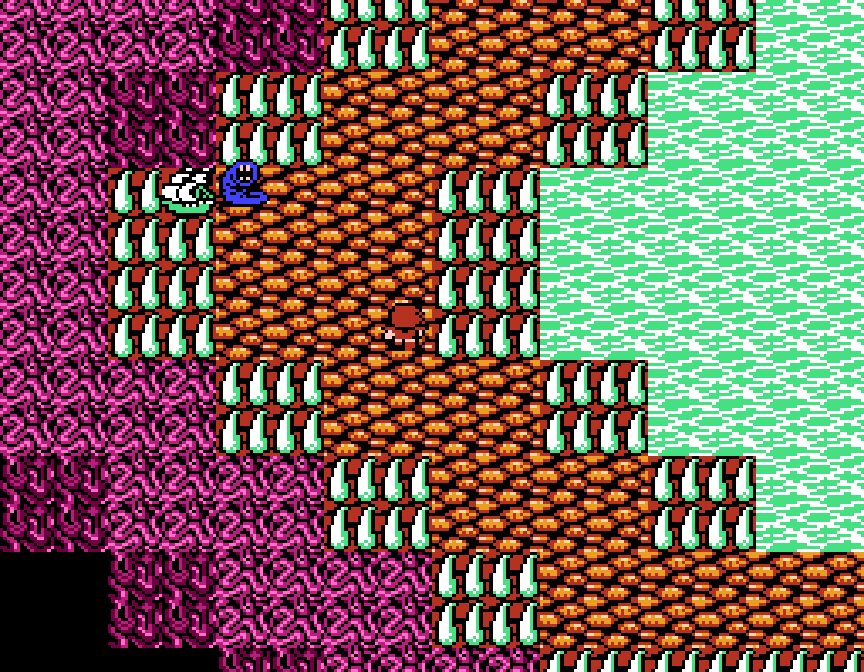 After defeating the Emperor for the first time, celebrations were cut short when a messenger  announced the Dark Knight had taken his place.  As was hinted at earlier in the game, the Dark Knight was Leon.  As it turned out his reign was rather short....

The End.  The final round of combat against the Emporer and the ending scenes.  "Gwaaaahhhh!!" indeed....