Ah, the Philips Videopac G7000 (known as the Magnavox Odyssey² in the States).  My mate Colin had one of these back in the early 80’s.  I’d never seen one before and I’ve never seen one since.  I can remember he had a pacman clone and some standard shoot ‘em fare but the most memorable title and still good fun today is Satellite Attack.

With a glance at the screenshots you may think this is an Asteroids clone but the mechanics of the game are totally different. Firstly your spaceship can fly in the standard eight directions; there is no turn/thrust and no inertia. Your shield is permanently on and I use this as the main means of destroying (I assume judging by the title) the satellites. You also have a gun but this is a bit awkward to aim – more on this later. Instead of breaking up when hit, these satellites send out projectiles in three directions which will then destroy anything they hit.  You can get a nice chain effect going when the screen is getting full.  There are two types of satellites, or spinning X’s as they look like.  The slower spinning ones just drift around, the faster spinning ones home in on you. You also get another spaceship occasionally flying across shooting at you.

As I said, the main means of dispatching the enemy is ramming them.  This disables your shield and you need to wait a couple of seconds for it to restore.  Your shield is a circle of flashing dots around your ship. One of the dots is white to signify the direction your gun shoots and I finally figured out it’s mechanics after nearly thirty years!  As you move the dot moves slowly clockwise around your ship until it points in the direction you are travelling, by which time you are normally either at the edge of the playing field or what you wanted to shoot has moved.  I just use the gun to take pot shots at what it is vaguely pointing at.  You need to be careful with this as shooting also disables your shield for a couple of seconds.

Don’t expect to be racking up thousands of points in this game either.  The slow spinning satellites are worth a whole 1 point, the faster ones a whopping 3 points.  You also only get one life so games can be quite short.

The graphics are understandably blocky but are smooth and the shield flashes so didn't show up in the screenshots.  The sound to be honest is a tad annoying after a while but it’s a fun little game I recommend everyone at least tries. 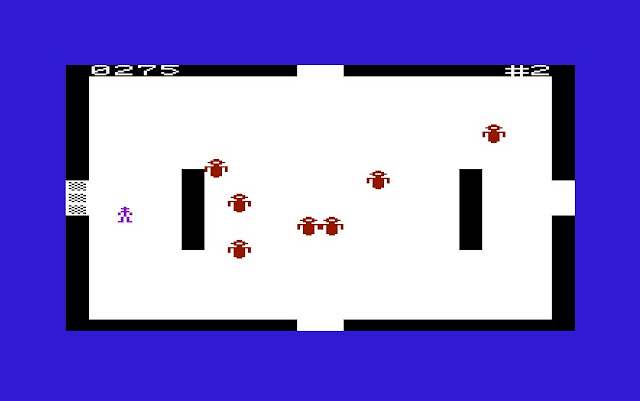 Seriously, I don’t intend to include (many) arcade conversions on this list unless they are exceptional but this is a clone so I’ll let it pass.  It is actually a great game.
Basically you fight your way through a series of rooms shooting robots as you go. There are only about half a dozen screen layouts but that’s not bad for only 4K.  Hell, a blank Word document would take up more space.  You start off fighting green robots, if you make it the next room you get cyan robots.  These are a little tougher but are worth more points.  After that you face red then black robots.  If you lose a life it’s back to the green ones. Like Berzerk!, Amok! features the electric walls, and robots that can take each other out.  It is missing Evil Otto which can be a blessing or a curse depending on your viewpoint.

Aside from the slightly flickering main sprite the graphics are well defined.  The sound is as basic as you’d expect and the controls are responsive.  Another cracking game for the VIC.


First up is Blitz, one of the games I got with the VIC-20. This game has to have the simplest controls ever – the only key used is the space bar.  There were many clones of this on other computers, but most other computers have better games, not so much the VIC.

Your aim is to flatten all the buildings in a randomly generated city by dropping bombs from a plane flying from left to right across the screen.  You don’t control the plane, so just concentrate on when the bombs are dropped.  The bombs will take out a set number of blocks of the building when they hit; taller buildings requiring more hits.  When the plane reaches the right side of the screen it appears back on left slightly lower.  The game ends when the plane either successfully lands on the flattened landscape or crashes into one of the buildings.

Why the plane can’t land at an airport or fly around the buildings, rather than destroying a city is beyond me.  Why didn’t I question ridiculous plots when I was young?  I must be getting cynical in my old age.

Anyway, the sound is basic, the graphics are basic and the controls (control rather) are basic but it does have that all important ‘one more go’ quality.  That’s enough to get it on my list.

Firstly, a bit about me.  It makes me feel old, but have been gaming since the late 70’s.  I can’t remember exactly when it started but during that period my brother and I owned a couple of fluorescent display games (Astro Wars being the one I remember) and my family bought a Grandstand console which had several built-in variations of Pong and a lightgun. I also, although rarely, visited the arcades when I had the chance – early memorable games variously being Kasco’s The Driver, Xevious, and M.A.C.H.3.  I was also amazed by Dragon’s Lair although never having had the chance to play it I wouldn’t have realised how little control you had over the character.
My first proper home computer was a Commodore VIC-20 I bought from a friend before moving up to a 48K Spectrum as a few of my a friends also owned them.  I had other friends who owned variously a Philips Videopac G7000, Atari 2600, Commodore 64 and BBC Model B. My next computer was a 128K Spectrum which was a bad buy as the 8-bit era was sadly coming to an end at that point although there were a few good games for it (Starglider in particular).
Next up was an Atari ST bought in part because my best mate had one and I couldn’t afford an Amiga.  We had some good times linking up the machines playing Stunt Car Racer, Populous and Spectrum Holobyte’s Falcon among others.  It also had some great two player games such as IK+ and Speedball 2.
In the early to mid 90’s I got my first PC blowing £1,500 on a (then) state of the art 90mhz Pentium PC with a huge 1Gb hard drive and (if I remember correctly) a whopping 16Mb RAM.  At the time it could run any software thrown at it (often too fast) and it introduced me to the joys of editing autoexec.bat and config.sys files in order to run a game.  I can’t remember any games for the recently released Windows 3.11 that came installed. I have owned PCs ever since and also bought my first consoles – Sony Playstations 2 and 3.
Back in the early days games were just simple pick up and play affairs, or to be more accurate simple, wait 5 minutes to load and play affairs. In recent years, being married with a family I don’t have the time to invest hours and hours in adventure, strategy or RPG type games anymore and have started playing this type of game again – games such as Peggle, Soldner-X, Bejewelled, Zuma that you can play for a half hour and put down again.
In that vein I thought I would go all retro and pick my favourite games from some of the popular systems and say a few words on the ones that, for me, have stood the test of time.  I’ve already found a couple of games I used to love, but couldn’t bear to invest any time in today.  I hope to revisit some games from my youth, games I missed out on playing and games I had never heard of.  Being a gamer for so long I can turn a blind eye to crude graphics and deaf ear to primitive sounds, and concentrate on playability and fun.
Posted by Wingnut at 09:36 No comments: