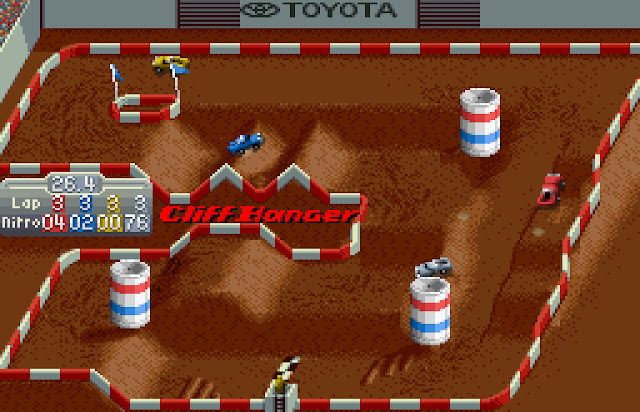 Super Off Road is obviously based on the 1989 arcade game Ivan 'Ironman' Stewart's Super Off Road.  I played the Amiga version from 1990 but didn't included the subsequent console versions in the entry which, apart from dropping Ivan, are not quite straight conversions.

First task is to pick the best version from the SNES, and Sega's Master System and Mega Drive.  Unsurprisingly the Master System release from 1993 is first to go. The console struggles against the 16-bits in terms of graphics, sound and gameplay.  The Mega Drive version was a latecomer to the party, arriving in 1994.  The 16-bit Sega and Nintendo are pretty much on a par as far as audio and handling go, but I prefer the larger sprites on the SNES.  The graphics seem too small on the Sega and leaves empty space either side of the track.

Whereas the computer versions of Ivan 'Ironman' Stewarts Super Off Road are derived from a game designed to gobble coins, Super Off Road is a little easier on the consoles:-

The only real downside to Super Off Road on the SNES is that you can only have one extra player - there is no option for three players even with a multi-tap adaptor.  The grey car is also tuned to go a bit too fast in my opinion.  Unless you get a jump on him in the first race he gets impossible to beat as he spends all his prize money on nitros.  Nonetheless it is still a great game.


The podium ladies are modestly dressed on the SNES.
Posted by Wingnut at 13:39 6 comments: