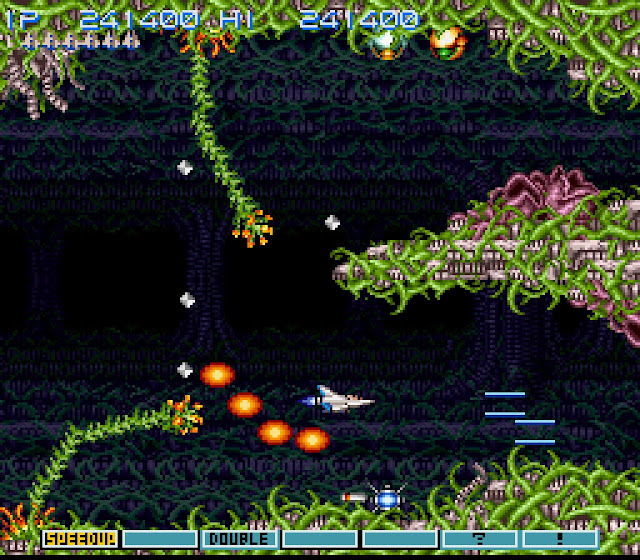 Although I am a big fan of the Gradius series, Gradius III has somehow passed me by.  The SNES port is based on the 1989 coin-up of the same name, but with several changes, including shorter stages and a toned down difficulty level.


Once again it's just you and your trusty Vic Viper spacecraft facing the might of the Bacterion Empire.  Gradius III retains all the staples of the original game in the series such as the power meter, weapons and options.  In addition, many of the enemies from previous games return in this one.


Like Gradius II you can choose from a number of pre-configured power meters as well as shield types at the start of the game. There is also an edit mode where you can tailor the power meter to suit.

The game starts off in the usual way with simple formations of enemies to shoot down.  Shooting all the enemies in these early formations results in them dropping a power up capsule that adds to your power meter.  Later, you can tell which opponents will drop a capsule as they are a slightly different colour.  The capsules come in an orange or blue colour.  The orange one adds to your power meter, whereas the blue one acts as a smart bomb when it is touched.

Pressing the appropriate button activates the highlighted power up.  Added to the end of  the meter in Gradius III is the '!' symbol. By default this activates a smart bomb when selected, but this can be changed in the edit mode.

Even early on I found the game tough going and had difficulty getting to the first boss without losing a life.  I wasn't particularly enjoying the game, so had to relent and choose the easy mode.  This made the game much but better for someone with my meagre skills although it may have made it a tad too easy - on my initial attempt I didn't lose my first life until the level three boss only because I didn't know its attack pattern.  As with any Gradius game, when you lose a life you also lose your power-ups making it difficult to get up to speed again.
Moreso than the previous game on my blog, Gradius III is afflicted by slowdown when the screen is busy (and sometimes when it's not).  In most cases this makes the game that little bit easier rather than being an annoyance.

The music and graphics are good, and the gameplay (slowdown apart) is typical Gradius.  It sticks to the basic Gradius recipe but adds few extras without spoiling it.  I found it a bit too hard for my tastes in the normal mode, but these was overcome by lowering the difficulty level.  Gradius III is a very good addition to the series. 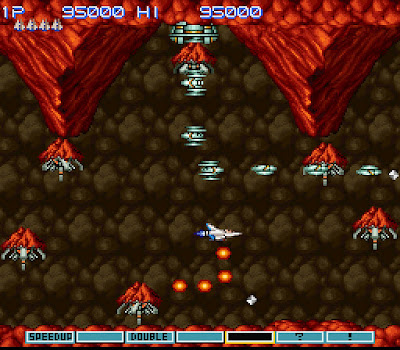