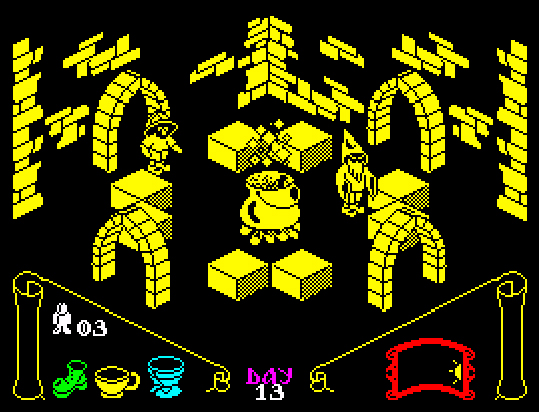 Knight Lore is a 3D isometric adventure game published by Ultimate Play The Game.  It was the game that spawned a new trend for this viewpoint during the mid to late 80’s.  Although Ant Attack had used isometric projection over a year before, it had failed to capture the imagination like Ultimate’s 'filmation' releases.  Knight Lore was one of three games featuring Sabre Man released during 1984, following on from Sabre Wulf and Underwurlde.  According to Tim Stamper it was supposedly completed before Sabre Wulf but was held back "because the market wasn't ready for it".

The ultimate (excuse the pun) goal of the game is to cure yourself of lycanthropy by visiting the dying wizard Melkhior in Knight Lore castle.  To do this you have to seek out the cauldron room which is situated near the centre of the castle.  In this room you’ll find Melkhior the wizard and, obviously, a cauldron.  The wizard doesn’t look like he’s knocking on heaven’s door as he perpetually circles the cauldron and kills on contact.  The cauldron itself flashes up an ingredient you need to collect in order to create a cure for your disease. Once you deposit the object a new item is shown. You have a time limit of forty days represented by a dial displayed at the bottom of the screen.  When a moon shows on the dial you change into the ‘werewulf’.

The castle contains more than 100 rooms – I’ve mapped it but haven’t counted.  Many of the rooms require platforming and lateral thinking skills (and occasionally luck) to get through.  The platforms are made up of blocks, some of which are moving and others which may sink or disintegrate when stood upon.  There are also a variety of enemies present in the castle which will normally kill on contact.  The only difference I can see between sabreman and the werewulf is that certain enemies are repelled by the former and attracted to the latter.  This can be useful to remember when navigating certain rooms.  The sparkly thing atop the cauldron also attacks you if you enter the room as a werewolf.

I first played Knight Lore around a friend’s house soon after completing Alien 8 and remember the game mechanics to be a bit clunky next to the later game.  This was especially true of the transformation between sabreman and werewolf which can happen at inopportune moments.  Also annoying is the way you can die by having spiky objects randomly drop from the ceiling in some rooms – I hate unfair deaths.  Playing again with fresh eyes it’s not nearly so frustrating. It is certainly more linear than Alien 8 and, if I remember correctly, it is easier to die – mainly on something spiky or by touching one of the fast moving ghosts. I also found the time limit a bit punishing.  I ran out of time after putting 8 objects into the cauldron so haven’t completed it…..yet.

It is another good game from Ultimate and was certainly a trendsetter but I think I will prefer the more refined Alien 8 when I get to 1985.


I should mention here that Knight Lore was also released for the Amstrad CPC in 1985.  It generally plays slower than the Spectrum version - frustratingly so if there are more than two moving objects on the screen.  They also added an extra colour but some of the combinations are a bit jarring.  I prefer the footstep sound on the Spectrum as well - the Amstrad version plays a note each time Sabreman takes a step which can and does get annoying after a while. The Speccy version is better in my opinion.