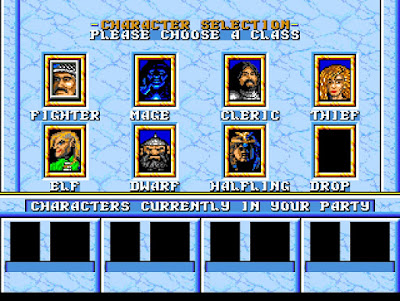 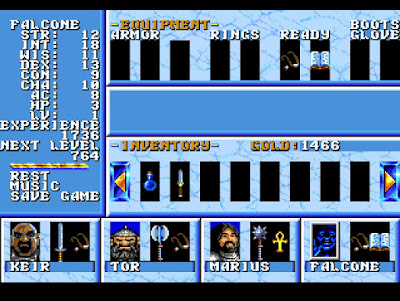 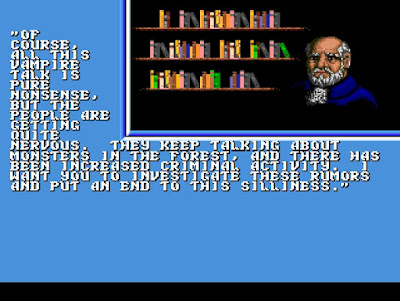 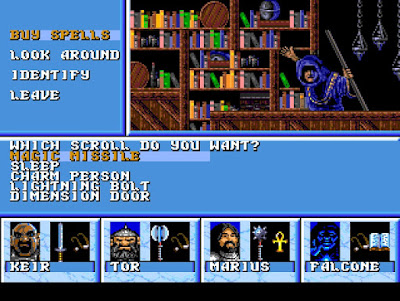 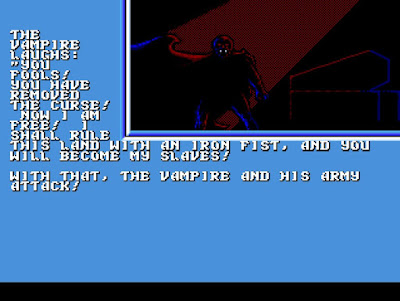 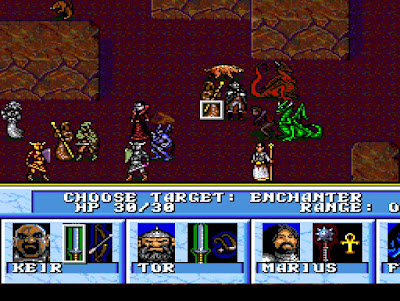 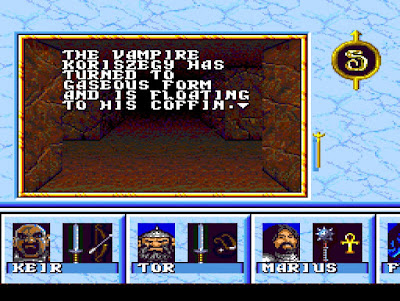 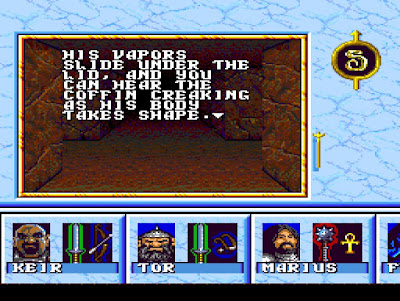 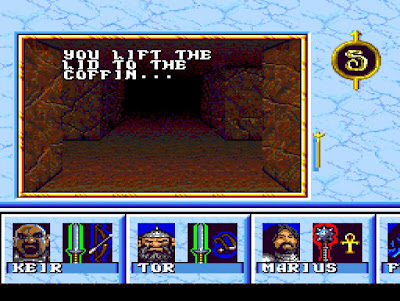 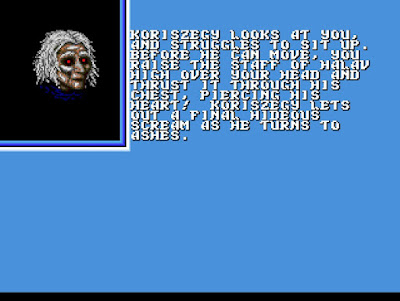 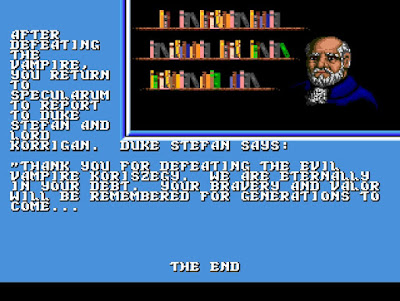 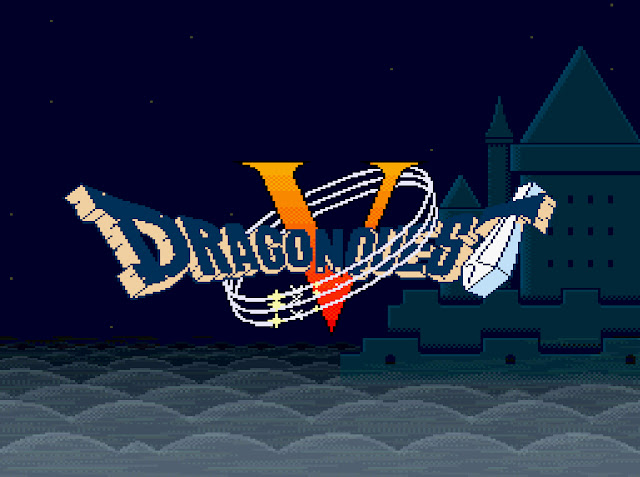 While gamers in North America were still playing Dragon Warrior III, and a month before Dragon Warrior IV was released there, those lucky Japanese gamers were already getting their teeth into Dragon Quest V: Hand of the Heavenly Bride.  Poor sales of the previous games and the cost of localisation meant this game was not released in the US.  I am playing an English version from DeJap Translations.  I started this game soon after finishing Dragon Warrior IV and, whilst the game engine is basically the same, the difference between the graphics and sound quality is staggering.  The archaic graphics have received a 16-bit makeover and the soundtrack has been dramatically improved on the new hardware.

The game begins with an effective in-engine cut scene that sets up the story nicely....

Dragon Quest V starts on a ship with you playing as a six year old boy.  You are heading back to your home town of Santa Rosa with your father Papas, who has been away for five years searching for 'something'.  Your father is distracted with his research allowing the young Wingnut to get into mischief (and level himself up).  You are soon off to nearby Alcapa to see your father's friend Duncan who has fallen ill.  You are befriended by Bianca, Duncan's daughter, and set off on an adventure together while Papas recovers from the illness he caught from Duncan.  I grew quite fond of Bianca but had to leave Alcapa when Papas recovered. 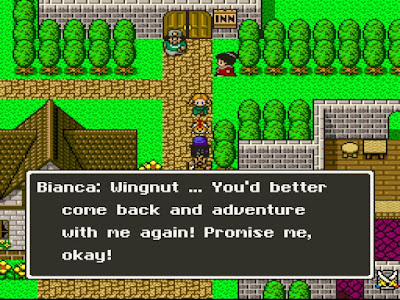 Back in Santa Rosa, Papas is summoned by the King of Reinhart and tasked with guarding Henry, heir apparent to the throne.  Henry is subsequently kidnapped but Papas manages to chase down the culprits.  Papas defeats his guards but their leader, Gema, holds a knife to Wingnut's throat and says that if Papas continues to fight, you will be killed.  Papas is attacked again but does not fight back.  Before he dies he tells you your mother is still alive and to find her. 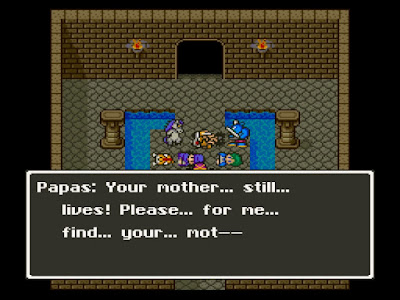 The story continues 10 years later with you and Henry as slaves building the Great Temple.  You manage to escape and return to Reinhart where Henry stays on.  Santa Rosa has been destroyed but you find a scroll from Papas along with the Zenithian sword.  The scroll explains that Papas had been searching for a 'legendary hero' who can wear the Zenithian armour and is capable of wielding the Zenithian sword.  It also says you mother is still alive but has been kidnapped by an evil power.  I also visited Alcapa in search of Bianca, but Duncan had long since sold up and moved on.

I will note my thoughts below... 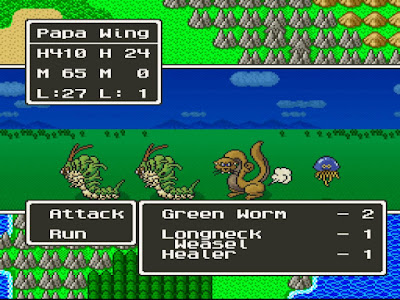 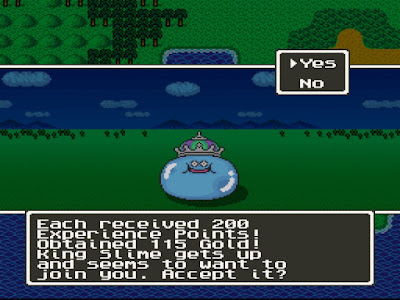 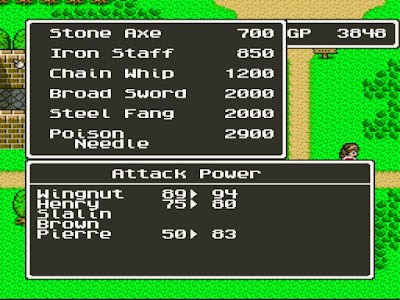 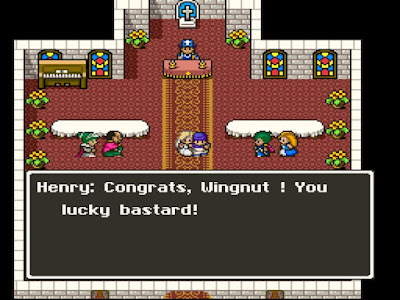 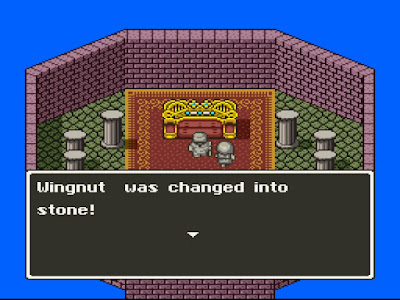 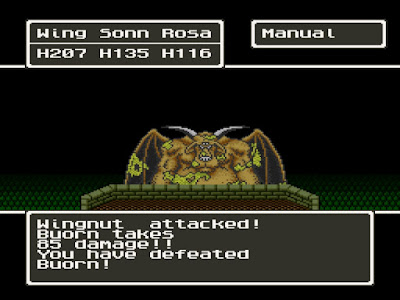 Defeating Buorn took several attempts and a lot of grinding. Once defeated he dropped the Final Key which meant I was able to access areas I couldn't reach before. 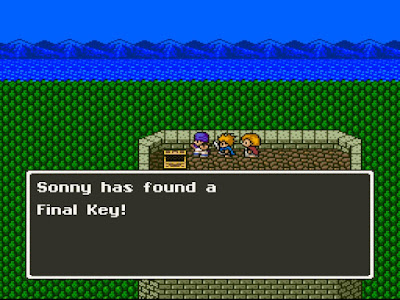 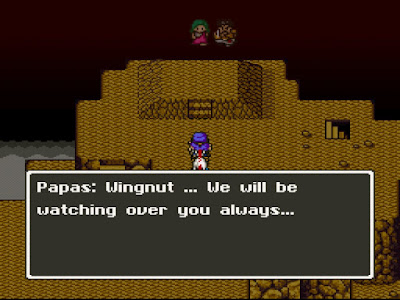 And so we finally meet Mildrath...


As usual the final boss comes in two forms.  The first form was simple enough to defeat but I could not beat the second form. 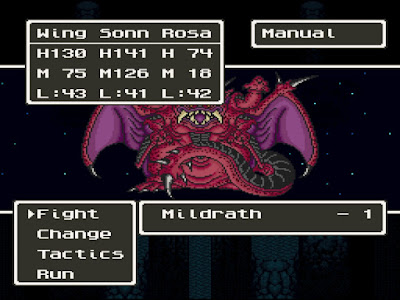 He didn't take much damage from physical attacks and he reflected magical attacks back at the caster.  Conversely, Mildrath can do a lot a damage with physical attacks and can cast the most powerful party damaging spells.  Additionally, he clears any buffing effects and heals himself every few rounds.  After several attempts and a lot of grinding I had to admit defeat and resigned myself to leaving this game unfinished.  I didn't feel to bad as I greatly enjoyed the journey up until this point.


After playing the previous two games in the series I was expecting another long slog.  Although it was very long, I found Dragon Quest V much more bearable.  This was helped in part by the more detailed graphics.  The sound was much improved too but I had to mute it long before I finished the game.  What really made the game enjoyable was the fantastic storyline and the fact that Wingnut was kept on as the lead character even after finding the legendary hero.  It made a change from Dragon Warrior IV with the main player character changing after every chapter.  Following Wingnut from childhood through marriage and parenthood made me feel more attached than I normally would to a game character.  I was genuinely interested to see what would happen next as the game progressed.  Overall Dragon Quest V is a brilliant game and I would rate it as my favourite JRPG to date.


The thought of not completing this game kept niggling away in the back of my mind.  After a few weeks I went back the game a did some grinding in the Evil Mountain every couple of days.  After a few failed attempts and with a lot of grinding in between I eventually defeated Mildrath.  This was done using the Increase and Bikill spells on the party and using the Sage's Seed every round (restores a few hit points to each character including those in the wagon).  I also swapped out party members that were low on hp until they were healed enough to re-enter the fray.  Eventually I managed to defeat Mildrath. 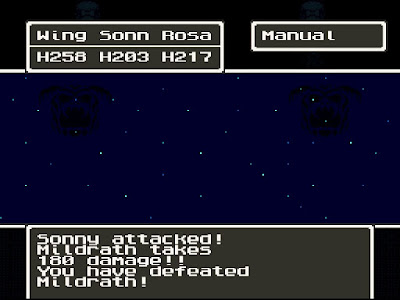 The ending was a bit anti-climactic.  You get whisked around the world to visit the main cast of characters which seemed to last an age.  The last place you visit is Granavia....