Balloon Fight is a neat little game released for the NES in 1986.  It is rather reminiscent of the arcade game Joust, utilising same left, right and ‘flap’ controls. The game is a quite bizarre and there is no backstory to the game in the manual (which is probably just as well).

The games takes place on a single wraparound screen with some platforms scattered around and water at the bottom.  You start the game strapped to a couple of balloons.  For whatever reason you have to fly around the screen popping the balloons of your enemies while they attempt the same.

Enemy balloons can only be popped by attacks from above and if successful the enemy descends by parachute.  If you hit the parachute or the enemy lands in the water he will die.  If he lands on solid ground he will inflate another balloon after a short time – you can kill the enemy by hitting them again before they take off.  When an enemy lands in the water, a bubble rises up the screen which can be collected for bonus points.

If the player is successfully hit by an enemy, one of his two balloons will burst.  This makes flying a bit harder, but thankfully you can flap your arms continuously by holding down the B button.  If the second balloon is popped you will lose one of your three lives.  You can also lose a life by being eaten by a fish if you venture too close to the water.  If you take too long to clear a screen a lightning bolt travels around the screen that is fatal if touched.

After every third stage there is a bonus round where the aim is to pop as many balloons as possible that are released by pipes at the bottom of the screen.

Balloon Fight can also be played with two players either competitively or co-operatively but I haven't had chance to try this mode.

The sound and graphics are nothing special but do their job adequately.   The controls can take a little getting used to due the inertia but can be picked up within a short time.  Additionally there is a good scoring system that rewards skilled players.   Overall this is a great game.

Hello Sinclair ZX Spectrum 128 - Launched in the UK in January.  It came with an extra 80Kb memory, a three channel sound chip and an external heat sink that helped keep your tea warm.  Sadly it was too little, too late....

Goodbye Sinclair Research - In April the Sinclair brand name and computer range is sold to Amstrad.

Hello Sega Master System - Released in North America in June.  It was completely overshadowed by the NES.

Hello Nintendo NES (again) - Released in Europe in October.  It did not fare nearly as well as it did in the US.  It was outsold not only by the Atari ST and Commodore Amiga, but ultimately also by the Sega Master System (which was released in Europe in '87).

Looking through my shortlist of games for 1986 I've either played or not heard of most of them.  The only one I haven't played that really stands out is Pentragram* by Ultimate Play The Game.  I'm looking forward to playing Uridium and Tau Ceti again to see if they are still as good as I remember.

1986 looks like another year dominated by 8-bit home computer releases with the occasional 8-bit console and 16-bit computer games starting to creep in.


*I've since played Pentagram and didn't enjoy it.  It plays like a combination of Knightlore (good) and Nightshade/Gunfright (bad).
Posted by Wingnut at 22:22 2 comments: 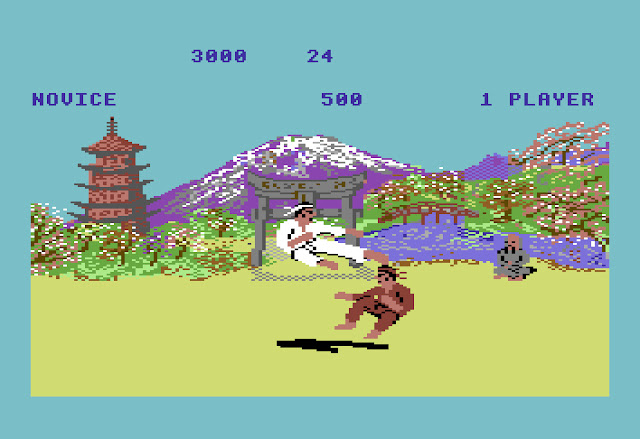 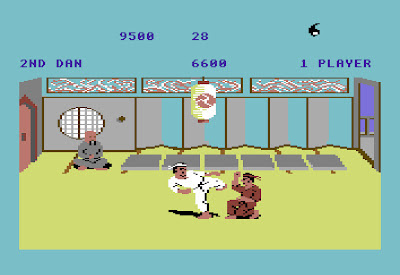 As I said, the Commodore 64 boasts the best version of the game.  Although the graphics are blockier, the game runs a tad faster than on the Spectrum or the Amstrad.  The sound is also better comprising a suitably oriental tune and some (very) primitive digitised spot effects.  It’s still a fun game when played against another person and can prove a tough challenge in the single player mode.
Posted by Wingnut at 07:55 1 comment: 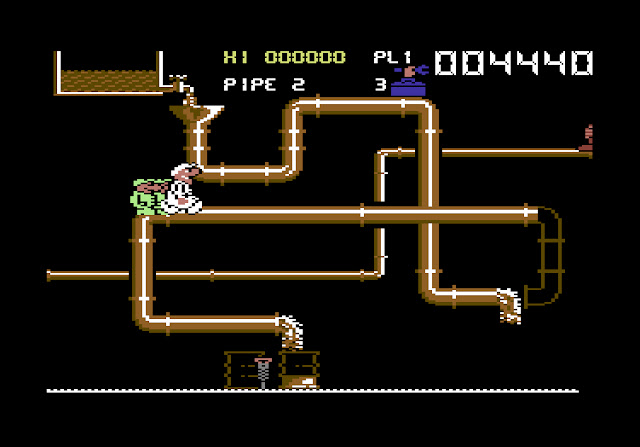 Super Pipeline 2 is the sequel to the excellent Commodore 64 game Super Pipeline.  Your task is to once again keep the pipes flowing long enough to fill barrels at the bottom of the screen.  Various tools such as drills, hammers and sink plungers have run amok and are out to scupper your plans, along with the bugs and lobster from the first game.  These enemies run along the pipes and try to put holes in them.  You are armed with a gun to shoot the enemies but you can only shoot left or right.  To repair the pipes you need to use your endless supply of repairmen.  At all times there are two repairmen roaming the pipework which must be collected and guided to the leak.  The leaks need to be fixed quickly as there is only a finite supply of liquid supplied by a tank at the top of the screen.  If the tank is emptied before the barrels are full, your score is rapidly depleted until they are.


Super Pipeline 2 is a brilliant arcade game that has enough changes to make it better than the first game.  Once again the blocky graphics suit the game though lack a little of the character they had in Super Pipeline.  There is some decent music and sound effects to accompany the game.  The game also features inter-level cut scenes which are played out at the bottom of the play area. 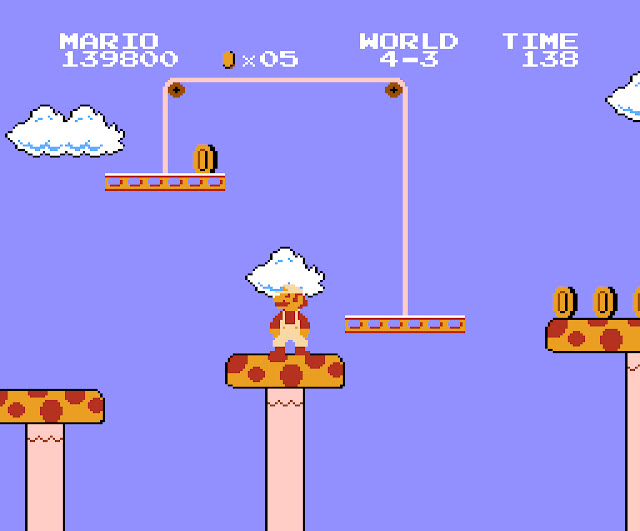 I’ve played a lot of platform games so far for this blog.  Of these I’ve added my favourites.  Super Mario Bros. is the first one I’ve come across that still looks and feels ‘modern’.  Most of the platform games I’ve tried until now are flick screen affairs with plain backgrounds and simple sprites.  Super Mario Bros. was a breath of fresh air gave the genre a much needed kick up the jacksie.


In this game you take control of Mario (or Luigi in two-player mode) and have to make your way through the Mushroom Kingdom to rescue Princess Toadstool from the evil Bowser (justified or not, I can where Nintendo got their ‘kiddy games’ tag from).  is made up of 8 worlds with each split into 4 stages.  You have to complete each stage within a set time limit, avoiding or defeating Bowser’s minions on your way. Mario’s main form of dispatching the enemies is by jumping on top of them.  If there are enemies on a platform he can jump into it from below and knock them off their perch.

Jumping from below into blocks marked ‘?’ will reveal coins or occasional power ups.  Collecting 100 coins provides you with an extra life.  Power ups include the Magic Mushroom which makes Mario grow to twice his size and allows him to break bricks above him.  If he is hit by an enemy he reverts to his normal size. When Mario picks up the Fire Flower he can shoot fireballs to make short work of the enemies.  Picking up the Starman makes Mario invincible for a short while enabling him to run into enemies with impunity.


As mentioned there are 8 levels split into 4 stages.  The last stage of each level is always set underground and leads to Bowser who must be passed to complete the level.  Some of these stages can be quite infuriating as unless you take the correct route the stage can go on indefinitely which does take some of the shine off the game.  On checking a walkthrough stage 8-4 involves a pipe maze which looked very confusing.  Players who completed this game without a guide must have been almost superhuman.


Controlling Mario can take a little getting used to.  You control how fast he runs and how high or far he jumps.  You can also make slight adjustments to his jumping mid air.  The difficulty comes with his inertia which can make it tricky landing on single blocks. It’s not a major point – it just takes a bit of practice.

Super Mario Bros. is a prime example of 2D platform gaming and helped set the template from that point on.  The scrolling and animation are smooth.  The graphics and sprites are bold and bright.  The music and sound effects are good. The learning curve is just about perfect.  And, after a little practice, the controls are spot on.  Overall it’s a highly polished game and difficult to criticise without being picky.  The only criticisms I can make is that the tunes get a bit repetitive after a while and, in my opinion, the underwater levels didn’t quite gel with the rest of the game.