M.U.S.H.A. is a vertically scrolling shoot ‘em up released exclusively for the in 1990.  It’s a game I was not familiar with and have to admit that first impressions were not that good.  If I had to describe it in one word it would be frantic.  You get wave after wave of enemies and gun emplacements firing at you.  The action is relentless and very fast and I was overwhelmed by the amount going on.  I died very quickly.  Time to consult the instructions.

It’s the year 2290 AD and man is advanced enough to start colonising outer space.  However, the supercomputer controlling a colony goes rogue and starts sending its attack units against mankind (very original).  You are one of a squad of pilots sent to put a stop to the attack.  Unfortunately all your wingmen are shot down and it is left to you to fight on alone.

The game has you clad in the flying Metallic Uniframe Super Hybrid Armour of the title.  This ‘armour’ doesn’t provide any protection as you lose a life with one hit.  If you die you reappear in the same spot with no let up in the onslaught.  The default weapon is a single forward firing laser.  In line with the genre, M.U.S.H.A. is played over several stages (seven in all), each concluding with a boss fight.

Your longevity and firepower are greatly improved by picking up the secondary weapons/power-ups that frequently appear.  They are displayed as Lightning, Fire and Water symbols.  The Lightning and Fire power-ups improve your firepower, while the Water icon provides a rotating defensive shield.  You can only carry one type of power-up at a time, but it can be upgraded up to four times if you continue to collect the same icon.  They also provide some protection as if you are hit you lose the power-up before losing a life.  Strangely, the main and secondary weapons are mapped to different buttons so I had to hold down both for maximum effect. 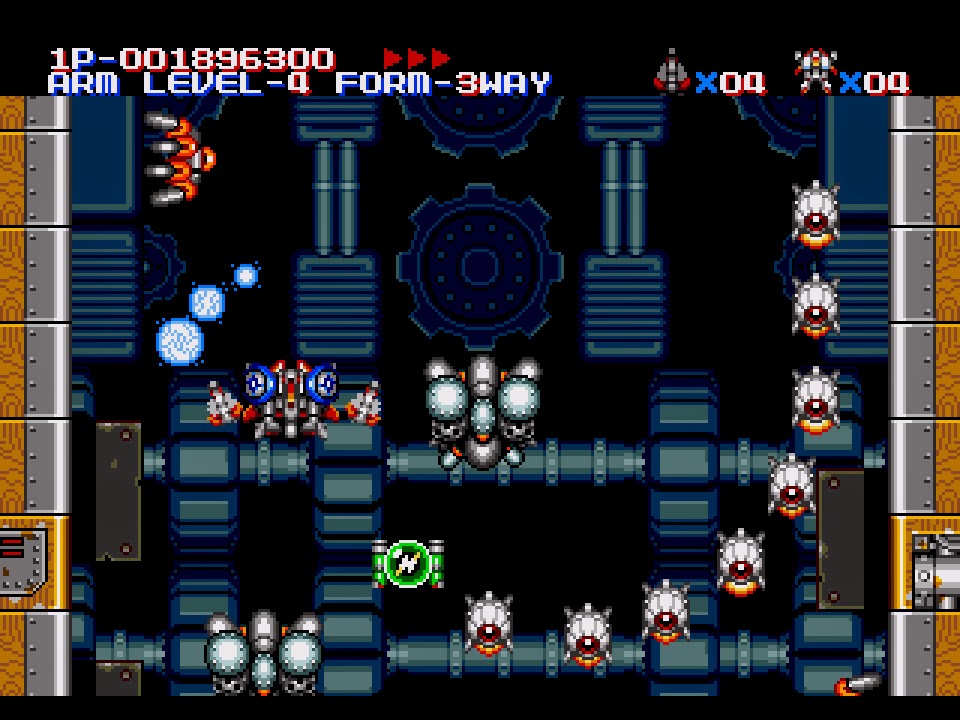 Firepower can also be increased by collecting the chips dropped by a particular craft that occasionally hovers on the screen.  As well as upgrading your main weapon, the chips provide a maximum of two bullet firing drones - three chips for each drone.  Continuing to collect the chips when you already have two drones creates replacements that are available if one is destroyed.

You can cycle through several formations for the drones depending on the situation. ‘Forward’ supplements your main weapon. With '3Way' they fire forward and slightly to the side. 'Back' fires backwards. Select 'Reverse' and they fire in the opposite way to which you are moving (the same as the red pods in Image Fight).  If you choose ‘Roll’ they circle your ship firing outwards in all directions.  In ‘Free’ mode, the drones home in on enemies and pelt them with bullets until they are destroyed.

Finally, you can also change your speed but only when the game is paused.

M.U.S.H.A. is intense, non-stop action with lots of bullets and varied enemies filling the screen.  Additionally, the scrolling is smooth and fast with no hint of slowdown when the screen gets busy.  The music is also good and gets the adrenaline pumping nicely.  Although very fast, the game is not overly difficult due to the fact the power-ups provide limited protection and you respawn in the same spot when you die.  M.U.S.H.A. is a game I like a lot and proves that first impressions don’t mean a thing.

Example gameplay - NB. Uploading the file to YouTube caused glitches in the graphics making the ship and weapons disappear.  Also the scrolling is not as smooth. 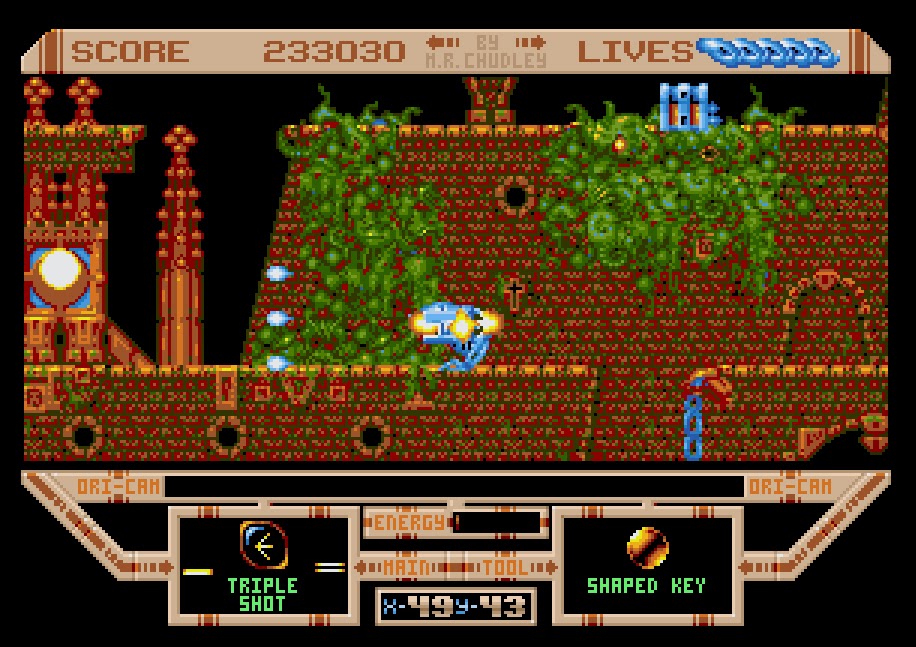 The title of this game piqued my interest when I noticed it on my shortlist.  It was down as a top game for the yet I had never heard of it.  From the title I guessed it would have been a platform game taking inspiration from the show in The Running Man film.  I wouldn’t be that wide of the mark.

There is a long winded story in the manual setting the scene, but briefly you are part of a resistance movement attempting to overthrow the 21st Century Government Inc. for whatever reason.  However it turns out there is a traitor in the resistance and you are captured by the Secret Police.  To set an example you are enrolled as a contestant in The Killing Game Show.  The Killing Game Show is a televised event where the participants are criminals.  They attempt to earn their freedom by escaping the 16 ‘Pits of Death’.  Contestants are ‘prepared’ by having the lower half of their body removed. The flesh is then stripped from the top half and replaced with armour.  It seems to me the game was completed first then a plot devised to fit.  If you ‘win’ all that remains is a mess of internal organs, not a hero as the resistance leader would have you believe.

The Killing Game Show was released on the and Commodore Amiga in 1990.  Sega Mega Drive/Genesis owners received it a year later renamed as Fatal Rewind.  The Amiga version is by far the best looking and sounding of the three. It has the best music of the trio.  It has smooth parallax scrolling (missing on the ST) and pretty water reflections (absent on the Sega).  The computers also contain two more levels than the console game.  The only place Fatal Rewind comes out on top is that the can play music and sound effects simultaneously where on the computers you can only listen to one or the other.

The Killing Game Show is a run-and-gun platform game played over 16 levels.  It takes place across 8 cylindrical satellites, each divided into 2 wraparound sections or ‘Pits of Death’.  Flying around these levels are waves of ‘Hostile Artificial Life Forms’.  These HALFs move in intricate patterns doing their best to sap your energy.  To add urgency to the proceedings there is ‘Deadly to Organic Life Liquid’ (DOLL) that gradually rises to fill the pit.  If you touch the DOLL or your energy is depleted you lose a life.  Your goal is to travel from the bottom of each pit to the top.

Scattered around the levels are containers concealing various weapons and tools.  Weapon upgrades replace your standard single shot laser but have a limited number of shots before reverting to the default weapon.  Tools include extra energy, shaped keys, ‘water freezer’ and Oracles (these give hints when used).  You can carry only one tool and one weapon upgrade at a time.

When you lose a life you are sent back to the beginning of the section. An ingenious feature is that you are shown a replay of your previous attempt.  You can interrupt it at any time to take back control of your character.  This way you can get back to the point you messed up without playing the whole level again. You are able to fast forward the replay to save time.

Your character itself is very mobile.  It can jump, crouch and climb walls on the way to the top of the pit.  The challenge comes from finding, then memorising, the correct path through each level.  Some sections offer an additional challenge apart from escaping.  For example, one section on the second satellite requires you to collect diamonds.

So, the Amiga has the best looking graphics, the best scrolling and the best sound.  That makes it the winner, right?  Wrong. The Killing Game Show on the Commodore suffers the same frustrating difficulty as Blood Money (also by Psygnosis).  The first section is easy enough but I kept getting killed by the DOLL on the second.  To find out why I could get further on the Atari I went to the same point in both games and waited for the rising liquid.  On the ST I had to wait 1 minute 32 seconds, whereas on the Amiga I died after only 44 seconds.  The DOLL rises over twice as fast making the game far too difficult

So the emerges as a surprising winner.  Losing the parallax layer helps the game scroll quite smoothly – not something the ST excels at.  The music, again, is fairly good for an ST and can be switched to sound effects if it becomes unbearable.  It also has the extra levels over the conversion.

The only issue I have (which also affects the Amiga) is that your character can get ahead of the slow scrolling.  Until I got used to it I occasionally died off-screen without seeing what had hit me.