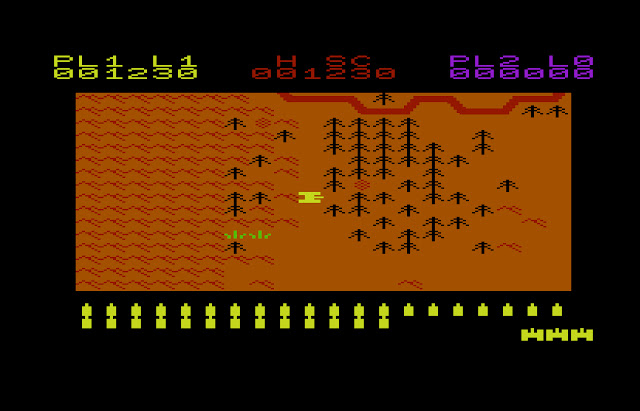 Tank Commander from 1984 is the fifth and final game on my list for the Commodore VIC-20.  I can’t quite remember why I bought it as I had a Spectrum by this time. I think I got it because the description reminded me of a board game I had called Tank Battle.  Again, there were vastly superior games around at this point for other computers but this is one of the better VIC titles.

Tank Commander is played out over a large semi-randomly generated play area.  The scrolling terrain consists of various elements such as mountains, rivers, trees and a road. In the game you control a tank and have to travel into enemy territory to destroy an oil depot, an (I think) communications station and a command bunker before moving to the next level.  The command bunker can only be destroyed from below.

Out to stop you are enemy tanks, mines and the occasional aircraft.  Enemy tanks are either black or white.  The black tanks will hunt you down while the white tanks are static and are normally placed next to bridges.  Mines are scattered around and are easy to avoid as are the bombs dropped by the aircraft.  Once past the tanks, the enemy installations are easily destroyed.

The graphics are pretty good for the VIC and the sound consists a constantly rumbling engine noise and some simple spot effects.  As I said this is neither the best game for the time nor indeed for the VIC-20 but I have a soft spot for it so it gets on the list.