Raid on Bungeling Bay is a multi-way scrolling shoot ‘em up released on the Commodore 64 in 1984, and for the MSX and NES in 1985.  The best version is on the Commodore 64.  It was the first commercial game designed by Will Wright who would go on to design SimCity and cash cow The Sims.

The game is set on a planetoid that has been occupied by the Bungeling Empire where they are constructing a war machine with which to attack Earth.  They have built 6 different coloured factories which produce their weaponry.  The factories are supplied by ships of the same colour.  The game takes place on a large 2D wraparound playfield viewed from above.

In Raid on Bungeling Bay you take control of a helicopter and start on an aircraft carrier which acts as your base.  The helicopter is armed with an unlimited supply of missiles and 9 bombs.  Your aim is to disrupt the Bungeling infrastructure and ultimately destroy the factories whilst protecting your carrier.

Most of the enemy installations and weapons can be destroyed by missiles but the factories need to be bombed. These factories are protected by AA batteries initially but as the game progresses the enemy develops a more advanced arsenal of weaponry including tanks, fighter and bomber aircraft.  Your helicopter can take a certain amount of damage before it is destroyed although this can be repaired and your bombs replenished when you land on the carrier.  A nice touch is that the screen border changes from green to yellow to red as you take more damage so you know when to land without looking at the damage counter.  You start with five lives but if the carrier is destroyed you are only left with the helicopter you are currently flying.

At its heart Raid on Bungeling Bay is a simple shoot 'em up but there is some strategy involved in disrupting the Bungeling supply lines and destroying the factories to slow down their technological advancement.  Your helicopter is quite nippy but can initially be difficult to control accurately due it's inertia.  Graphics and sound are best described as adequate, the graphics mostly being a drab combination of black, blue and gray.  Overall, though, it’s a fun little game. 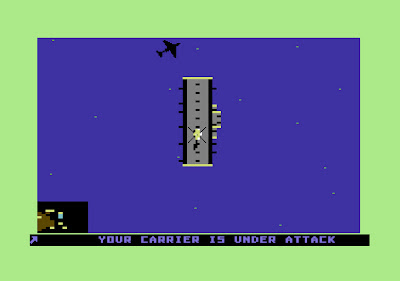