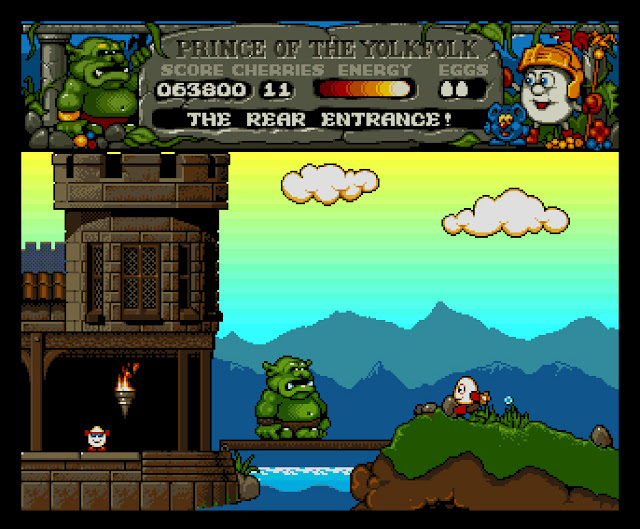 With a main entry in the  Dizzy series you know exactly what you are going to get - a fairly easy adventure game combining platforming, inventory based puzzles and slightly awkward controls.  Dizzy: Prince of the YolkFolk is no exception.

The game was first released in 1991 for the Sinclair Spectrum, Commodore 64 and Amstrad CPC and was highly regarded at the time.  In 1992 it was converted to the Commodore Amiga, Atari ST and DOS.  A Nintendo NES version followed in 1993.  Finally an HD remake appeared in 2011 for the iOS and Android platforms.  I'm not interested in smartphone gaming on my blog so the winner of this lot is the Commodore Amiga.  Normally a game such as this would look the same on the Atari ST but Codemasters went to the extra effort of adding more colours to the Amiga version, notably the graduated sky.  It also has the nicest music playing throughout - much better than the grating Atari ST chiptune.  The graphics on the DOS version are on a par with the ST, both looking better than the NES.  The release on the three 8-bit home computers hadn't really progressed in terms of looks since the original Dizzy from 1988 so come bottom of the pile.

The manual says that Grand Dizzy was feeling down so Dizzy and Daisy decided to bake him a cherry pie.  However, Pogie the fluffle (whatever that may be) had stolen the cherries and ran off into the enchanted forest.  Dizzy and Daisy chased after Pogie and decided to gather more cherries at the same time.  They were soon lost but came across a seemingly deserted castle.  Daisy pricked herself on a mystic spinning wheel and felt sleepy.  She found a bed where she fell asleep.  Before Dizzy could wake her he was captured by Rockwart the troll and placed in an underground prison where the game begins.  Your goal is to escape from your cell and awaken Daisy.

Dizzy starts the game with three lives and a full energy bar.  Energy is lost by touching an enemy and a life is lost once it is depleted.  A life is also lost if Dizzy ends up falling into water.  No damage is taken when falling from any height (even from heaven).

Most of the puzzles contained in Dizzy: Prince of the Yolkfolk are fairly logical and are mainly solved by using the right item in the right place.  The items are scattered around the flick screen map along with a few red herrings.  Your starting prison cell is blocked by a locked door, but when it contains a pile of leaves, a match and a bucket of water it is pretty obvious how to escape.  Most puzzles follow this pattern so it is a comparatively easy game to complete.  The game also seems a bit shorter than previous Dizzy outings mostly down to the smaller map.

On your way to waking Daisy you must collect 20 cherries to complete the game.  Cherries also restore your energy bar if it gets sapped in any way.  Additionally there are stars and coins to collect for extra points.

To be honest Dizzy is not that much different from previous games in the series (including the awkward somersault action that can make judging some jumps a pain).  Saying that, I can't in all good conscience leave Dizzy: Prince of the Yolkfolk out of my blog when I have included some of his earlier adventures.