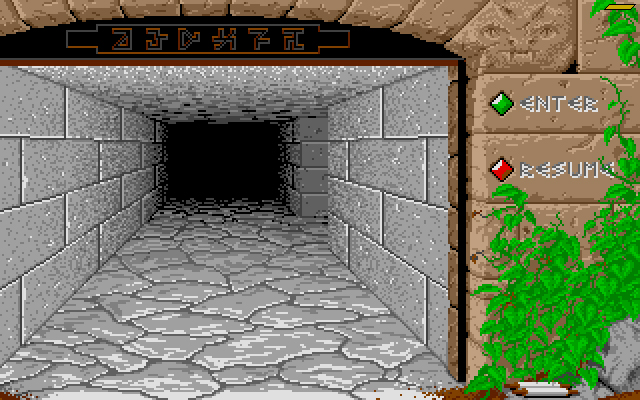 There was never any doubt from me that Dungeon Master was going to be included in my blog.  It is a game I have completed numerous times and has been the inspiration behind titles from the Eye of the Beholder series to Legend of Grimrock.  Although it was released on a few platforms I have opted for the Atari ST version as this was the original and was released at least a year before any others.  According to Wikipedia it achieved a 'market penetration of more than 50% of the Atari STs ever sold'.

Dungeon Master is a 3D realtime dungeon crawler viewed from a first person perspective.  What set it apart from its contemporaries were the gorgeous (if repetitive) graphics.  These along with the sparse sound effects help to create an eerie atmosphere.  It was the first game I can remember actually making me jump when I rounded a corner to be faced by a bunch of monsters. The interface is also very intuitive as the game can be entirely controlled by a mouse.  This makes it quick and easy to move around, manipulate items, cast spells and fight.

The manual starts with a short story that sets the scene for the game.  The Grey Lord has retrieved an orb called the Power Gem from the centre of a mountain.  The Power Gem had "thawed the ice from which dwarf and halfling, elf, man, and High Lord alike had risen". He hoped to use this to bring peace and harmony to the world.  However, when retrieving it the Grey Lord got the spell wrong which resulted an explosion.  The explosion caused his being to split in two - the good Lord Librasulus and the evil Lord Chaos.  A similar fate befell his apprentice, Theron, who was split into a bodily and spirit state.  It is as this spirit state you must enter the dungeon, choose four champions and guide them as they attempt to retrieve the Firestaff.  The Firestaff will enable Lord Librasulus to enter the dungeon, retrieve the Power Gem and banish Chaos......

You start the game by entering the Hall of Champions and have to choose up to four characters to guide through the quest.  The Hall of Champions has mirrors on the wall that contain the souls of previous adventurers who failed to retrieve the Firestaff.  You can choose to resurrect or reincarnate a champion.  A resurrected champion will have abilities and memories from their previous life; a reincarnated champion will not have any skills but will have better attributes.

Physical attributes are made up of Health, Stamina and Mana.  Health decreases when a character is hit, stamina by fighting while encumbered and mana by casting spells.  The physical attributes replenish over time and can be topped up with potions. Other attributes are strength, dexterity, wisdom, vitality, anti-magic and anti-fire.  These can increase when a character improves their skill level.  Skills comprise Fighter, Ninja, Wizard and Priest.  Fighter skill increases when fighting with hand held weapons, Ninja when throwing objects and fighting unarmed.  Wizard and Priest skills increase by using the respective spells.  Any character can become proficient at any skill so there are no 'character classes' as such.

The party is arranged in a 2 x 2 formation with two characters at the front and two at the rear.  Only the front rank can physically attack monsters they are facing.  It worth rearranging the position of the characters now and again to get them levelled up in all four disciplines.  Even swinging weapons and throwing objects at thin air can increase skills.  Indeed, even a character starting with 0 mana can eventually gain the Priest and Wizard abilities by drinking mana potions and practising the simplest spells.

Magic is another clever aspect of Dungeon Master.  Spells are made up of two to four runes and can be found on scrolls as you progress through the game. In most games the power of a spell is determined by the level of the caster.  In this game the power of the spell is determined by the which of the first six runes you select.  For example, you have the option of creating one strong health potion if you have enough mana (and sufficient skill) or you can knock out several weaker ones instead.

After choosing your party it is on to the game proper.  Discounting The Hall of Champions, the dungeon is made up of 13 levels.  As graphics throughout the dungeon look the same, careful mapping is essential if you are not to miss any areas (I'm glad I've hung onto all my old game maps).  The learning curve is set just about perfectly.  At the start enemies are easily defeated, puzzles are simple,  food and water is plentiful.  As you progress you are rewarded with greater weapons and armour, but the monsters get a lot harder to defeat, the puzzles are more devious and water sources become scarce.  There are also false walls and cunningly hidden switches that open up new areas of the dungeon.  Spinners, hidden pits and invisible teleporters also make an appearance later in the game.  A compass is found early on which helps with the mapping.

Combat is very simplistic and not very tactical, unless you call hit and move tactical.  It is not worth going toe to toe with most monsters as you will quickly perish.  As a real-time game there is no flee command - you retreat when you have to.  It is best to keep in mind an escape route so you don't get cornered or wind up in a dead end.

It was not until recently I discovered there was an alternative ending to Dungeon Master.  If you follow the story in the prologue (which I probably read once and quickly forgot) and take the Firestaff back to the Lord Librasulus, he says he no longer has need of you and destroys the party.

I had always experienced the 'proper' ending by using the Firestaff to trap Lord Chaos in a flux cage.  Once he is surrounded he is unable to teleport away so you can then use the Firestaff to 'fuse' Chaos and Librasulus together to bring back the Grey Lord.  I guess we wait until the sequel to find out what became of Theron.


So, how does Dungeon Master stack up today?  It is still a great game although it fails to create the same atmosphere it conjured up a quarter of a century ago.  The dungeon and monster graphics are still pretty good.  The monster animation is composed of very few frames but is tolerable.  The sound is still adequate if sparse. The challenge remains though and I really enjoyed playing it through once again.

I deliberately have not written a walkthrough for Dungeon Master as there are already plenty out there.  You could do worse than reading The CRPG Addict's experiences here.