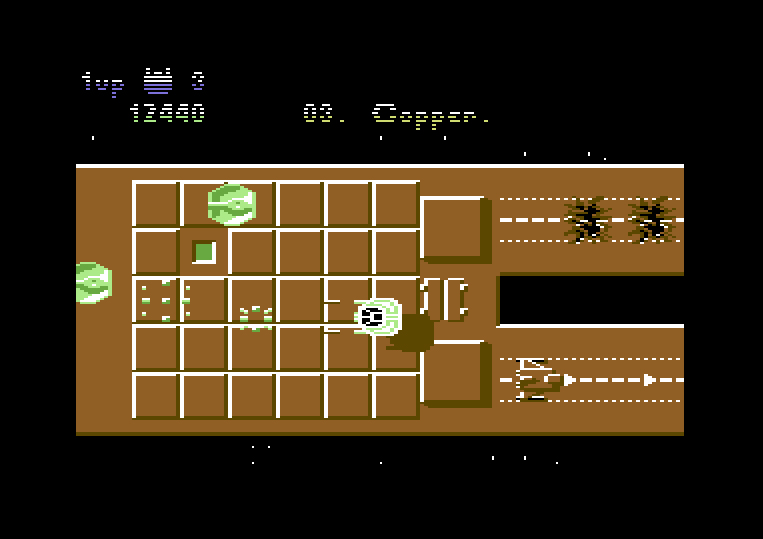 After his success with Paradroid, Andrew Braybrook comes up trumps again.  After we read the review and the 94% score it got in Zzap!64, me and my mate headed straight into town to get this for his Commodore 64.  We were allowed to play it on his big downstairs telly and I still remember being blown away by the graphics - it was like having an arcade machine at home.

The plot goes that fifteen enemy super-dreadnought starships have gathered in the solar system and are draining minerals from the planet cores.  Each of the super-dreadnoughts is named after a metal, culminating with the titular (and fictional) Uridium. As per usual it falls on your shoulders to take a lone starfighter and destroy the enemy vessels.

Uridium takes place over the smoothly scrolling decks of these super-dreadnoughts.  The game uses an unusual viewpoint as it is a side scroller viewed from above.  You control a fighter called the Manta which is rather nippy and can travel in both directions.  You start at one end of the enemy ship and have to travel to the other end strafing objects on the surface and downing waves of airborne enemies.  Once enough of the enemy defences have been destroyed you get a 'Land Now!' message and can land on a runway at the back of the ship to presumably plant a device to destroy it.

Most of your lives will be lost colliding with the superstructure of the dreadnought.  There are pylons and walls to be avoided whose height can be determined by the length of the shadows they cast.  The game plays so fast it quickly turns into a memory test.   The further you progress, the narrower the gaps get between the tall structures. There are also homing mines that are occasionally launched from from flashing ports and these have to be dodged until they self destruct.


Once you have landed on the enemy vessel you can earn extra points in the form of a reaction test mini-game.  You then take off and fly back over the dreadnought while it vaporises before heading off to the next one.


This is one impressive game with outstanding graphics and good sound.  The scrolling is fast and silky smooth running at 50fps - which is faster than my video clip.  It can and does get frustrating when trying to get through the same gap or flying into the same wall time and again  but once you memorise a layout you can get that bit further each time you play.

The Commodore 64 is far and away the best version of Uridium.  The other 8-bit machines can't hope to match it graphically, lacking as they do the hardware scrolling and sprites.  The Atari ST version looks the same as the C64 but the game is so slow and cumbersome it feels like you're playing in treacle.  Not to mention the worse scrolling and a lack of destruct sequence at the end of each level.  A very, very lazy port indeed.  A version also appeared in 1990 on the NES as The Last Starfighter with different sprites. It lacked that 'certain something' the C64 had and was ultimately a charmless version of the game.

Email ThisBlogThis!Share to TwitterShare to FacebookShare to Pinterest
Labels: 1986, Games U, Platform - Commodore 64