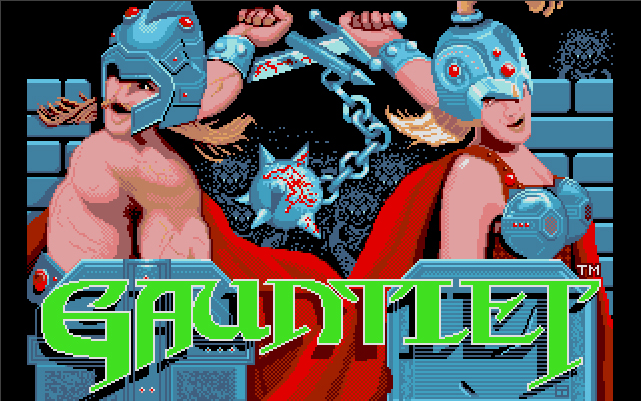 Whether it was a marketing ploy or whether it was something else entirely, there were several Atari arcade conversions that made it to the but not the Commodore Amiga.  Asteroids Deluxe was one game, Super Sprint another.  Probably the most well known, though, was Gauntlet. How me and my mates would have poured scorn on our Amiga owning buddies if we had had any.  Which we didn’t.

Gauntlet was a hugely popular top-down scrolling dungeon crawler.  The original 1985 arcade version supported up to 4 simultaneous players, had plenty of speech and superlative graphics.  Gauntlet was subsequently converted to most most home formats at the time with the boasting the best version.

On the home versions you can only have 2 players participating at once and the Atari ST was no exception.  Each player takes their pick of one of the available characters who are Thor the Warrior, Thyra the Valkyrie, Merlin the Wizard and Questor the Elf.  Each of the characters has their own strengths and weaknesses. Thor is strong in hand to hand combat but has weak magic.  Thyra has the strongest armour and I would say is the most balanced character.  Merlin (my personal favourite) has the best magic but is useless in hand to hand combat and has weak armour.  Questor has the fastest movement and shots and is my least favoured of the four.

You start the game as your chosen character with 2000 health points which gradually decrease over time.  The objective of the game is to reach the exit on each level of the dungeon and to get as high score as possible.  There are several types of monsters that are out to stop you.  The ghosts are suicidal and just run into you to deplete your health.  The grunts try to engage you in hand to hand combat.  The demon and sometime invisible sorcerers respectively dispense fireballs and magic spells at you.  Lobbers can throw projectiles at you from the other side of a wall.  All these monsters come in three strengths and can be spawned from generators which also come in three strengths.  Their strength determines how many shots it takes to kill them.  Death also puts in an appearance from time to time – he can only be destroyed by magic or when he has drained 200 of your health points.

To help you get further into the game or score more points there various types of pick-ups that are scattered around the levels.  There are several kinds of potions that can be used.  Standard potions can be picked up and used to damage all enemies and generators on screen, or can be shot for less destructive power.  There are also several marked potions which provide specific power ups such as more potent shots or extra speed.  Food and drink can be used to replenish health; however the jugs of drink can be shot so be careful.  For navigation, keys can be picked up to open any locked doors and, although not pick-ups, teleporters appear in later levels.  Finally, treasure chests can be picked up to boost your score.  If you linger too long a level all the doors will open automatically and eventually all the walls will turn into exits.

Although it was the most authentic conversion of Gauntlet outside the arcades at the time, the Atari version was far from perfect.  The biggest feature to suffer was the sound – The title tune and spot effects sound like they were sampled (badly) from the arcade machine and the speech is missing altogether.  As with the other home versions only two players are supported simultaneously.  The graphics look pretty authentic but lack the palette of the arcade game and the horizontal scrolling in particular is pretty bad.  Most of these issues were addressed in Gauntlet II apart from the floor graphics which lost some colour but it was still at good game for 1987.  Oh, and did I mention it wasn't available on the Amiga?

Back in January, commenter Red_Cardinal left the message “What I remember of Gauntlet on the Atari ST is that it ran soooooo slowly it was virtually unplayable”.  "Pah!" thought I, "Check out the video". I then thought no more of it.

More recently they sowed seeds of doubt in my mind as to the authenticity of my review - “As for the video, are you playing the game on an actual ST machine or are you emulating it? The two things not being the same of course :-)”.

Ok, you’ve got me there.  I hold my hands up and freely admit to playing the games on an emulator for the sake of convenience. It’s the only way I have to make half decent videos and screenshots.  But, what to do about Gauntlet?

One genuine Atari 520 STe (upgraded to 1 meg) and one, ahem, not so genuine copy of Gauntlet.

After some rummaging around in the loft I found a “backup” copy of Gauntlet and an old Atari.  I switched it on at arms length half expecting a puff of smoke and the smell of frying capacitors.  To my amazement it started first time.  After more faffing about I managed to tune it in on the telly in my study.  I was a bit perturbed the disk drive light didn't go out and the top of the picture was flickering a lot but it will serve my purpose .  What was more surprising was that my copy of Gauntlet still worked….

Anyway, I can now state with no uncertainty that Gauntlet plays exactly the same on a real Atari ST as it does on an emulator and I therefore stand by my review.  I have posted a video below (the rattling/creaking sound is my 25+ year old joystick).


And Red_Cardinal – please spare my sanity and don’t cast doubt on any of my Spectrum reviews ;-)
Posted by Wingnut at 08:40