Before embarking on my blog I had never played a Final Fantasy game.  Hell, I’d never even played a JRPG.  Final Fantasy on the NES was released in in 1987 with the English language version not appearing until 1990.  Due to my desire to try the only Final Fantasy II and Final Fantasy III I am reviewing the first game early to keep them in chronological order.  It is the first in a long series spanning not only the JRPG backbone, but includes other genres such as MMORPGs and even a rhythm action game.

As a JRPG virgin, what did I expect?  I expected lots of random encounters and a linear story-led quest.  Because of this I half expected not to like the game.  In reality I think it’s great. 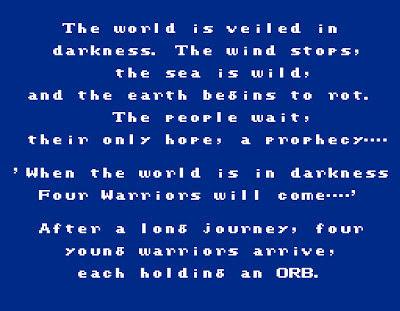 Basically you control four Light Warriors as they attempt to restore light to the orbs they carry. To accomplish this they need to defeat four elemental fiends who are ravaging the land.

Your initial task is to select up to four characters from a choice of six classes. The available classes are Fighter, Thief, Black Belt, Red Mage, White Mage and Black Mage. The Fighter is your standard warrior type and can use all types of weaponry and armour.  The manual says ‘the thief is good to have when you need to avoid an attack from the enemy’ which makes him superfluous in my book (moreso as I didn't find any traps to disarm, locks to pick or anything to steal).  The Black Belt can fight effectively without weapons.  The Red Mage is described as a fairly good fighter who can cast some Black and White magic spells.  The White Mage can cast only White (mainly defensive and healing) spells and the Black Mage can only cast Black (mainly offensive) spells.  Both the Black and White Mages are weak fighters.  You can give your characters any name you like as long as they contain no more that four letters.  Your characters are given stats but I didn't take note of whether these are preset or randomly generated.  These stats  increase during the game as you gain levels.  The manual suggests rookie players should select a Fighter, a Black Belt, a White Mage and a Black mage.  That’ll be me then.

Your party is dropped on the map just south of the castle and town of .  Despite being without arms and armour I decided to take a quick look around and it wasn't long before I came across my first random encounter.  The combat screen displays your party on the right and enemy creatures arranged on the left.  The combat is turn based and menu driven with you and the creatures fighting until one side is destroyed or flees.  Combat options are Fight, cast Magic spells, Drink a potion, use an Item and Run away.  Once you select an action for each of your characters, the combat cycles through all the participants until they have all taken their turn. Some enemies have special attacks such as paralyse or poison.  Some can turn you to stone.  With the party arranged in a line, combat is not very tactical as any character can attack any enemy and vice versa and there are no ranged weapons.  Additionally if you have a character attack an enemy creature and it dies, any subsequent attacks already aimed at that particular creature are wasted.  When enemies are killed you collect an amount of gold and experience points dependent on the creature type and how many there were.

After a couple of skirmishes I headed into town to heal and tool up.  With a couple of exceptions each town has the same shops.  There is a weapon and armour shop to buy combat gear.  An inn allows you to save your game and restore magic and hit points.  The Clinic allows you to reincarnate a dead character for a small fee.  There is a white and black magic shop with each store in the town selling a particular spell level.  For example, the two magic shops in Croneria sell first level spells, while has four magic stores selling third and fourth level spells.  Finally there is a supplies store where you can purchase various potions and various shelters.  The shelters are tents, cabins or houses which are used to restore health and save the game when you are not near a town.

As I mentioned, magic spells are bought in shops with the higher level spells getting progressively more expensive.  Each level has four spells while a mage is only able to memorise three of these so you need to choose wisely.  You are able to cast a set number of spells for each spell level.  The number of spells you can cast is increased as your character gains experience.

Here is my summary and thoughts of the game (for a full walkthrough check out Zenic Reverie's  RPG Consoler blog here (still WIP at the time of writing) or the irreverent Shen Nung and his Inconsolable blog here).

Final Fantasy is a peach of an early RPG.  The graphics are excellent and sound is good considering the host platform.  It is also nice having the play area taking up the whole screen rather than viewing it through a window (à la Ultima/Bard's Tale etc).  The plot unfolds at a decent pace - you are forced along a linear path in the first half of the game but once you obtain the airship the whole world opens up.  There is also a nice twist at the end.  The  difficulty is set just about right - there were times when I had to limp into the nearest town with two dead characters and I only had a couple of full party deaths.  If the other games in the franchise are as enjoyable as this I am in for a treat.