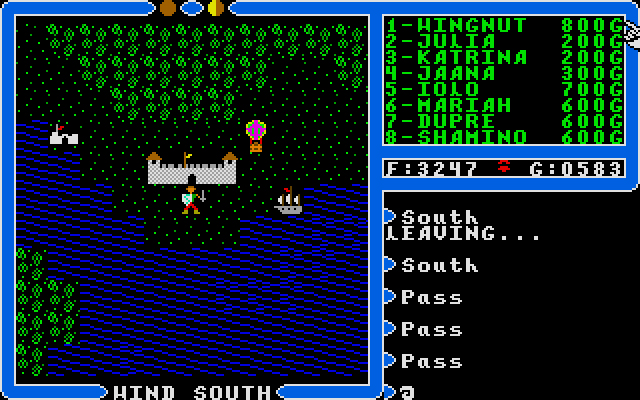 Ultima IV is one of those games I start off with every intention of completing but never quite manage it.  I love the game but my gameplay always ends up losing momentum. By the time I am back in the mood I've forgotten where I've got to and have to start over.  This time, for the blog, I was determined to reach the end.  I am playing the Atari ST version which came out in 1987 along with the identical Amiga release.  I've not personally tested it but I believe the PC version is slightly inferior in terms of graphics (certainly so in the dungeons).  Richard 'Lord British' Garriott has professed to this being his favourite Ultima game and it was the first in the series to  introduce the concept of 'virtues'.

You start the game by selecting your character name and gender and are then shown an introduction...


Upon reaching the gypsy caravan you are asked a series of ethical questions which will determine your character class.  This was unique for the time and was an ingenious way to start the game.  Although you can fudge the answers to choose any of the eight classes, I chose to answer truthfully and began the game as a fighter.  The starting location for the fighter is just outside Jhelom, City of .

Each of the eight character classes starts near the city that represents their virtue.  The eight virtues are Compassion, Honesty, Honour, Humility, Justice, Sacrifice, Spirituality and Valour.  Your aim is to become the embodiment of all these virtues through the actions and choices you make during the course of the game.  Only then can you descend into the Abyss to reach the Codex of Ultimate Wisdom to complete the game.

The main game world is tile based and is viewed from above.  Your party, monsters and towns are represented by a single icon.  When you enter a town the scale changes to the town plan.   The game employs a line-of-sight mechanic so you can’t see through trees, mountains or walls.  The only time you can view your entire party is in the battle screen.  Movement is limited to the four cardinal directions. As with previous iterations of Ultima, dungeons are viewed in a simple first person perspective.

It was my intention to firstly travel to meet with Lord British, then recruit Shamino, Dupre and Iolo in their respective towns.  I would then travel to the other towns picking up clues and delving into the dungeons.  I believe you need to have a party consisting of all eight character classes towards the end of the game, but I find picking them up early makes combat too unwieldy and time consuming.

As Jhelom is located on an island the only way off is by means of a moongate.  Although they can be rather ‘hit and miss’, moongates can be a convenient way to travel long distances.  The moongates are controlled by the phases of two moons.  The first moon phase represents where a moongate is open, the second represents the destination.  When the moongate opened, the second moon wouldn't have reached my preferred ‘destination phase’ before it disappeared so I jumped in hoping for the best.

I ended up on Verity Isle which contained The Lycaeum and the town of .  I talked to all the NPCs in both these locations before jumping back into the moongate. You can actually converse with characters in this game rather than get the stock responses you had in previous Ultimas.  All the NPCs respond to ‘name’, ‘job’ and 'health'.  You can then pick up key words in their answers to take the conversation further.  ‘Bye’ ends a conversation.﻿﻿
﻿In Moonglow I took the opportunity to buy some reagents.  Reagents are essentially the ingredients of a spell.  You need to mix the appropriate reagents together to make the spell before it can be cast.  There is a list of spells in the manual though some of the more powerful don’t have the reagents listed.  Some NPCs also reveal spell ingredients.  This was  a good time to pick up some honesty points as the proprietors of the magic shops are blind and you are asked how much gold you wish to give them.

To leave Verity Isle I had to hop back into a moongate to reach the mainland.  On my way to  I was thankfully attacked by pirates so was able to pick up a ship early on. One of my main bugbears in this game is the random nature in which ships appear.  You can sometimes play for hours before you even see one.

Combat takes place on the battle screen.  The terrain on the battle screen depends on what type of tile combat was initiated.  The terrain can be used to your advantage in battle which can be quite tactical.  Combat is turn based and each character can either move or attack (limited to the four cardinal directions), or cast spells.  In addition to normal melee and missile weapons, you can hurl flasks of flaming oil or attack from behind your comrades using the longer reach of the  halberd.  The bestiary in the excellent ‘History of Britannia’ manual shows the standard variety of enemy types you would expect in any fantasy RPG.  A defeated enemy leaves behind a (usually trapped) chest containing a small amount of gold.  One thing I didn't really appreciate until I played Final Fantasy and the Phantasie games (which didn't make the blog) is that you can see your enemies coming.  There are no random encounters and overworld combat can mostly be avoided if you wish.


The ship l commandeered from the pirates is the most useful form of transport in the game.  I used the ship to follow the coast to the .  Travelling by sea can be slow going if the wind is not favourable but you can reach locations inaccessible on foot or on horseback.

On the ground floor of the castle you can find Hawkwind the Seer who keeps track of your virtues.  He tells you in which virtues you have attained enlightenment and gives advice on how to achieve it in others.  On attaining enlightenment in a particular virtue you can gain partial avatarhood by meditating at the appropriate shrine for three cycles.

As usual with my RPG reviews I won't be blogging a full walkthrough (for this I recommend The CRGP Addict or an old blog called Blogging Ultima).  I will note some of my thoughts and experiences below....


Before you can enter the abyss to win the game you need to...
One you have the above you can then sail to the Isle.  After battling the pirates, wading through a swamp and making your way through molten lava, you can then use the bell, book and candle to open the dungeon.  In the Abyss dungeon, normal weapons always miss and the spells to go up or down a level fail to work.  At the end of each level you will find an altar which poses a question on each of the virtues.  If you answer correctly and choose the stone of the appropriate colour the altar will transform into a ladder to the next level.

Ultima IV was originally developed on the Apple II so the graphics are very, very primitive and any animation is two frames at most.  They probably looked basic back in 1985 and not much effort was expended on improving the graphics for the more powerful home computers.  The sound wasn't up to much either.  While the music is okay the handful of tunes quickly got repetitive.  I switched to the sound effects which were again basic and more annoying than anything.  I left these on but so low I could barely hear the ‘tick’ sound every step your characters take.  More that anything though, Ultima IV is about the story which is where the game excels.  Rather than saving the world from an evil baddie, your quest involves becoming the embodiment of eight virtues and an example for the people of Britannia to follow.  As far as I know this was and still is unique in the realm of CRPGs.  Also the game is completely non-linear.  I love how you can do any quest in any order as long as you complete your 'shopping list' by the time you enter the Abyss.  Ultima IV definitely deserves it's classic status.  I'm also pretty chuffed to have finally completed it after all these years and abortive attempts.

Screenshots from the Abyss.....