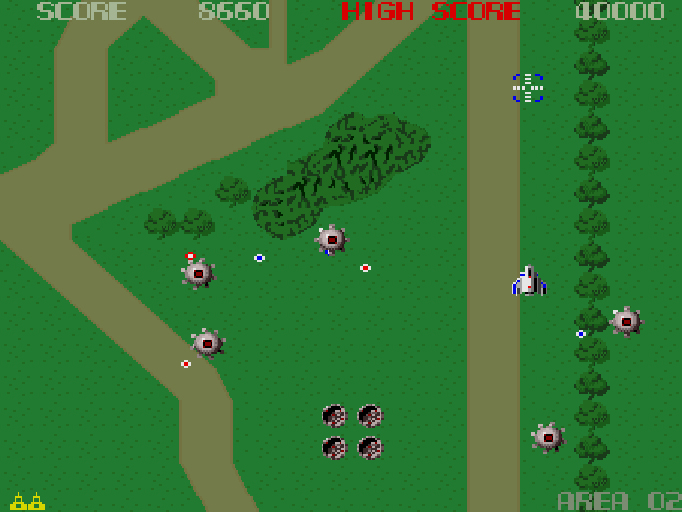 Years later my first job was as a computer operator in a finance company.  We had a warehouse where we used to archive all the computer printouts.  It was also used to store repossessions.  Imagine my joy when a tatty old Xevious arcade machine unexpectedly turned up.  Needless to say, for a couple of months trips to the warehouse suddenly became a lot more frequent and took a lot longer.  I only wish I'd had somewhere to keep it when it was sold off.

The arcade game first appeared in 1982 and was released on the Sharp X86000 five years later.  I am a bit confused by the back story. Apparently it is set on Earth which is being invaded by humankind's ancestors.  These ancestors had fled to the planet Xevious hundreds of thousands of years before to avoid an ice age.  They now want their planet back. There is also mention of a super computer call GAMPS and things called Sol Towers, but who really cares?  I didn't need a plot then and I don't need one now.

Xevious is a very simple vertically scrolling shoot 'em up in which you control a ship called Solvalou.  It is armed with guns to shoot down airbourne targets and bombs to destroy ground installations.  The bombs are aimed with the aid of cross hairs that travel in a fixed position in front of your ship.  The aerial enemies fly in swooping patterns across but often as not appear at the edge of the screen fire a few pot shots then fly off before you can get to them.   There are a few harmless ground installations but most fire bullets at you.  Quite early on they start spewing out bullets every second or so making them very hard to bomb.  The game is a lot more difficult than I remember.

Harking from 1982 and being one of the earliest scrolling shmups, Xevious was  basic by 1987 standards and even more so now.  It is a decent enough conversion but the graphics seem samey and look very dated.  Like-wise the sound and tunes do their job but are nothing special.  There are also no power-ups to make life easier in what is a very challenging game.  To be truthful, Xevious is here mainly for nostalgic reasons but it is a game I will break out every now and again for old times sake.  For that reason alone it makes in on the list.