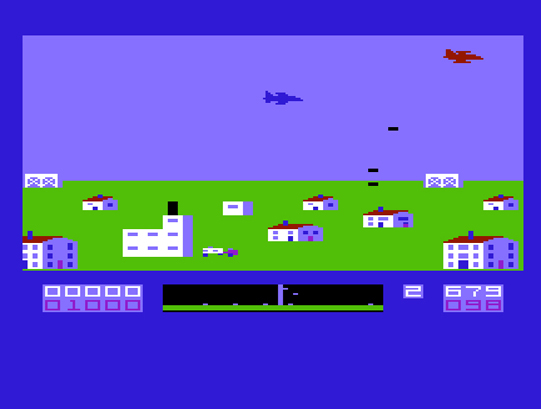 Skyhawk is decent shoot ‘em up for the VIC-20.  If it looks familiar it was because it was written by Steve Lee who programmed Falcon Patrol for the Commodore 64.  The display is similar to Defender in that you view a portion of a long, scrolling wraparound play area and have a radar image showing the positions of the enemy and your bases.  You fly a vertical take off/landing aircraft and your aim is to shoot down as many enemy aircraft as you can before your bases are destroyed.  The enemy planes fly in two at a time and seemingly drop bombs at random. You only have a finite amount of fuel and missiles available but these can be replenished by landing at one of your bases. The enemies can be shot down from behind or head-on.  It is very satisfying destroying them head-on and flying through their explosion.

The game has colourful graphics, fast scrolling and decent sound effects.  It also features inertia so you can’t just stop quickly to turn around or land.  Not a bad game for the humble VIC.