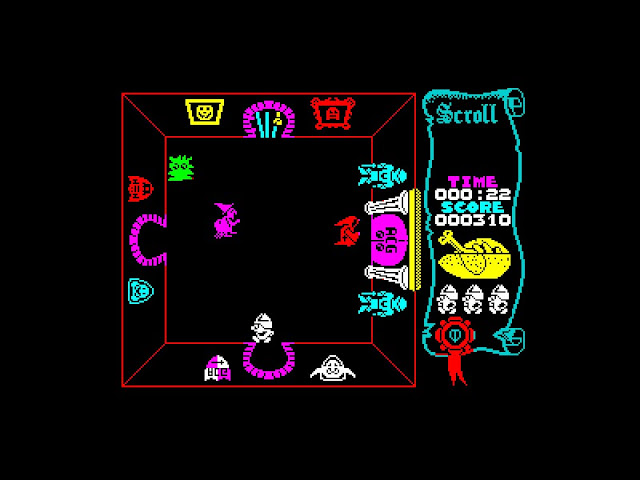 Atic Atac is the first game on my list from Ultimate Play The Game, one of the foremost developers for the Sinclair Spectrum.  They subsequently sold the name and are now known as Rare.

In Atic Atac you start as one of three characters who has been trapped inside a haunted castle.  You can only escape through the front door by finding three parts of the ACG key.  Pieces of the key are placed over the five level castle that is inhabited by ghostly beings which must be avoided or shot.  There are other enemies that appear which can only be destroyed or repelled by certain items scattered around the castle.  For example, Frankenstein’s monster can be killed if you are carrying a spanner.  Contact with enemies diminishes your ‘health’ which is represented by a roast chicken on the right hand side of the screen.  When you run out of ‘health’ you lose a life, but it can be replenished by picking up food.  If that wasn’t enough there is also a time limit.

The rooms on each level of the castle look very similar so a map is essential.  Most of the doors are unlocked and both these and the trap doors open and close on their own so you can get trapped in a room. There are also locked doors that come in four colours and can only be unlocked with the appropriate coloured key.  You only have three slots to carry objects and keys; additionally each part of the ACG key takes up a slot.  The view is a weird mix of side-on and top-down which doesn’t quite sit right with me.

I didn’t play Atic Atac much back in the day – I couldn’t really get into it then and did not have the patience to map it.  Mapping is vital to complete this game due to the similarity of the rooms making it almost impossible to memorise.  Once mapped the game is very easy and can be completed in minutes.  It’s still a good game though with fast, smooth animation and decent enough spot effects.