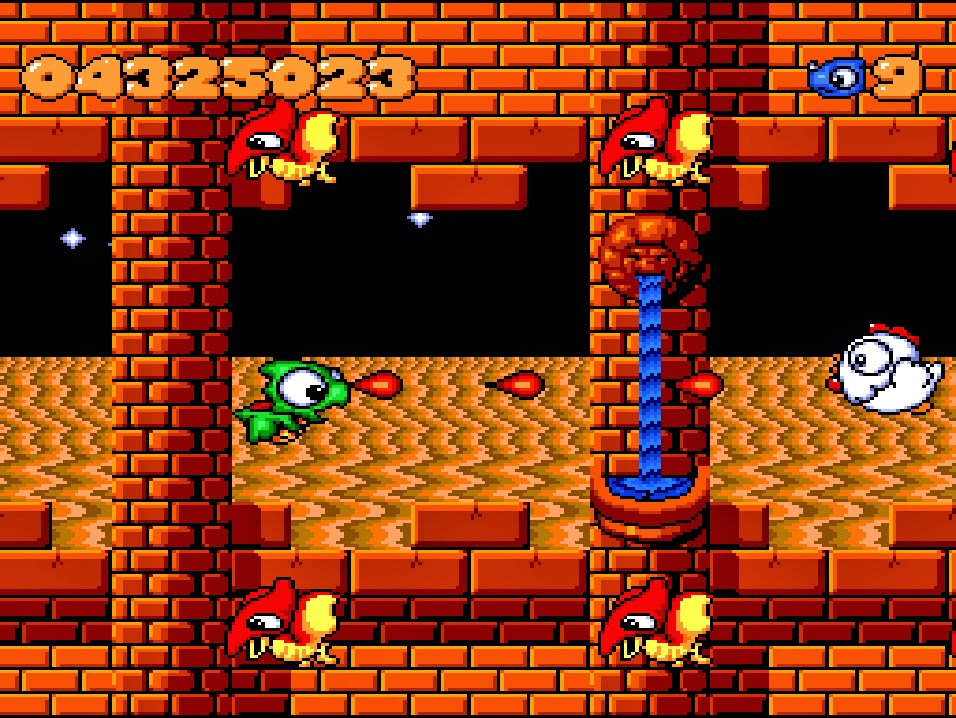 Coryoon: Child of Dragon is a horizontally scrolling shoot 'em up for the PC Engine released only in Japan in 1991.  More specifically, it belongs to (and I hate this phrase) the 'cute 'em up' genre.

Without a manual it's hard to be precise on the exact plot.  The intro shows a princess and Coryoon, her pet dragon.  In a flash of lightning an evil ne'er do well appears and, for some unexplained reason, transforms the princess into a little girl.  You are then thrown into the game as Coryoon, presumably to catch up with the evil doer and ask him to change the princess back if he would be so kind.

As with most games like this, it's the graphics that first catch your attention.  The flicker-free sprites are fast, well drawn and colourful.  The background is bright and colourful with multiple levels of parallax scrolling.  The music is ultimately forgettable but quite jolly and matches the graphics well.  Underneath all the pretty bells and whistles is a solid shoot 'em up.

The game is played over several stages made up of different environments.  Each stage has a mid and end-of-level boss.  The enemies are mostly made up of various types of birds and animals.  When killed they drop fruit which can be picked up for bonus points.  The enemies come in thick and fast without any slowdown and the screen can get very busy.

With Coryoon being a dragon his main weapon will be his breath.  This starts out as the usual rapid fire pea shooter.  Not pressing the fire button charges up a shot similar to the beam weapon in R-Type.  When Coryoon puffs out his cheek the weapon is charged and releases a powerful ball of flame when you next press fire.

The main weapon can be powered up by collecting orbs dropped by a stork.  The orb alternates between red, yellow and blue so you can choose your upgrade.  The red orb gives you a powerful, but short range fire weapon.  The blue orb gives you a longer, but thinner laser type weapon.  The yellow orb gives you a multi-way shot.  Each type of shot can be powered up a further two times by picking up orbs of the same colour.  If you are hit while carrying an upgrade, you lose the upgrade.  Get shot again and you lose a life.  If you do lose a life you carry on from where you died.

As well as dropping fruit the enemies occasionally drop Diamonds, Hearts, Spades and Clubs.  The Diamond changes Coryoon into a miniature version of himself.  It means he is harder to hit, but he loses the charge shot.  The Heart gives you two fairies that circle Coryoon and act as a shield.  They can alternatively be locked above and below your dragon.  The Spade is a single use smart bomb that clears the screen when detonated. The Club acts as a fruit magnet and draws fruit to Coryoon when holding down button I.  Only one of these power-ups can be active at once.

The final power up can be obtained by killing a chicken that occasionally appears.  The chicken provides a small dragon option that darts around the screen taking pot shots.  It disappears, however, when you encounter a boss 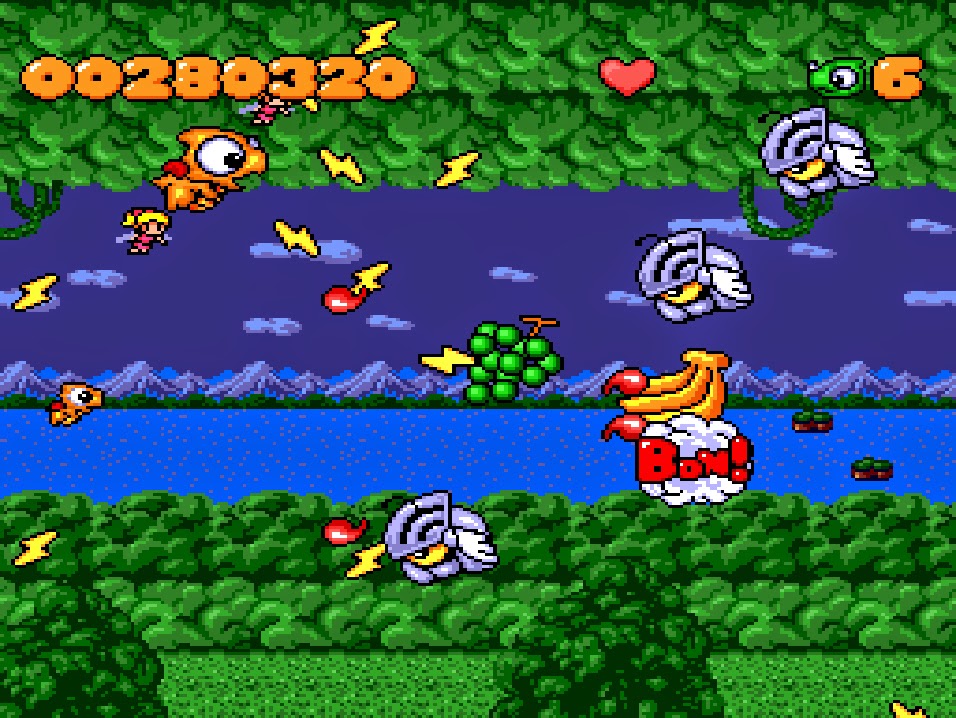 The games biggest draw is also its biggest drawback.  The screen can get very busy which, combined with the games speed and bright graphics, sometimes makes hard to figure out what's going on or why you lost a life.  You start the game with 5 lives and plenty more can be gained as your score goes up, but there are no continues. The bundles of extra lives make the game quite easy, which suits me fine and I can see myself coming back to it a lot.