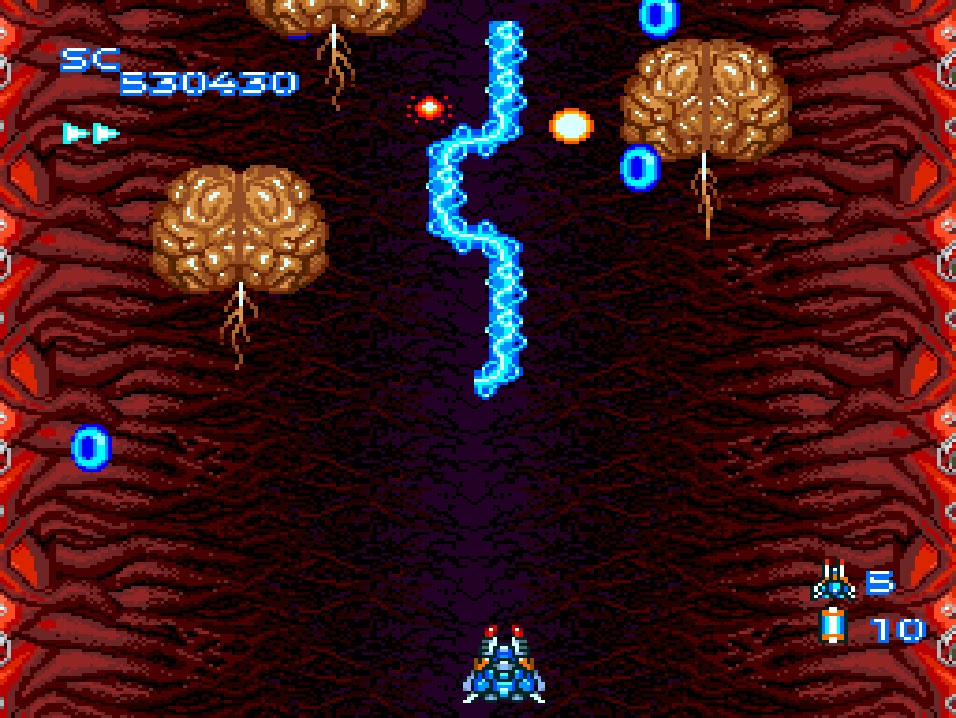 Blazing Lazers (or Gunhed as it was called in Japan) was one of the first games to appear on the new TurboGrafx-16.  It was released by Hudson Soft, one of the co-developers of the console, so remained exclusive to that machine.  As a highly regarded vertically scrolling shoot 'em up it should be right up my alley...

The plot says that Earth is under threat from the evil Dark Squadron with only you and your Gunhed fighter standing in their way.  Your aim is to make your way through nine stages, taking down various bosses as you go, in order to destroy the Dark Emperor.

The main weapon on your Gunhed ship is a rapid fire laser.  There are four numbered pickups that can change the weapon between a Photon Blaster, Field Thunder, Power Wave and Ring Blaster.  The firepower of these weapons can be upgraded by up to six levels by collecting purple power ups called 'gels' which are dropped by the enemy.

They also drop secondary power ups consisting of [H]oming missiles, [S]hields, [M]ulti-body (a drone that follows your movements) and [F]ull fire (strengthens the power of your weapons).

Finally there is the cluster bomb of which you carry a limited number.  These wipe most of the enemies on the screen and are useful for getting out of a tight spot.


Blazing Lazers eases you in gently with the first couple of levels being fairly simple affairs with plenty of power ups being dropped.  Different areas in each of the long levels favour certain upgrades so you often have to avoid power ups, as well as the enemy, in order to retain your weapon of choice.


Maybe it's just me, but I found the difficulty really ramped up in third level with lots of invincible enemies (and cluster bomb usage).  It then eased off again for the fourth level.  At the end of each stage a boss appears.  For the most part these are quite underwhelming - they have obvious weak points and simple movement patterns.


The actual game itself is an absolute blast.  The gameplay can get very frenetic in places, but it is in no way a 'bullet hell' shooter.  Although you lose your power ups when you die, so many are dropped it's quite easy to get up to speed again.  There are also a number of checkpoints in each level so you don't have to restart from the beginning.

The graphics are very good with a varied and smooth scrolling background.  The sprites are colourful, detailed and varied in size and shape and there is not the slightest hint of slowdown when the screen gets busy.  The sound effects are also pretty good including snippets of speech when you collect a power up.  There is music playing throughout, although I found some of it sounded a bit out of place in a fast shoot 'em up.  Overall, an excellent game. 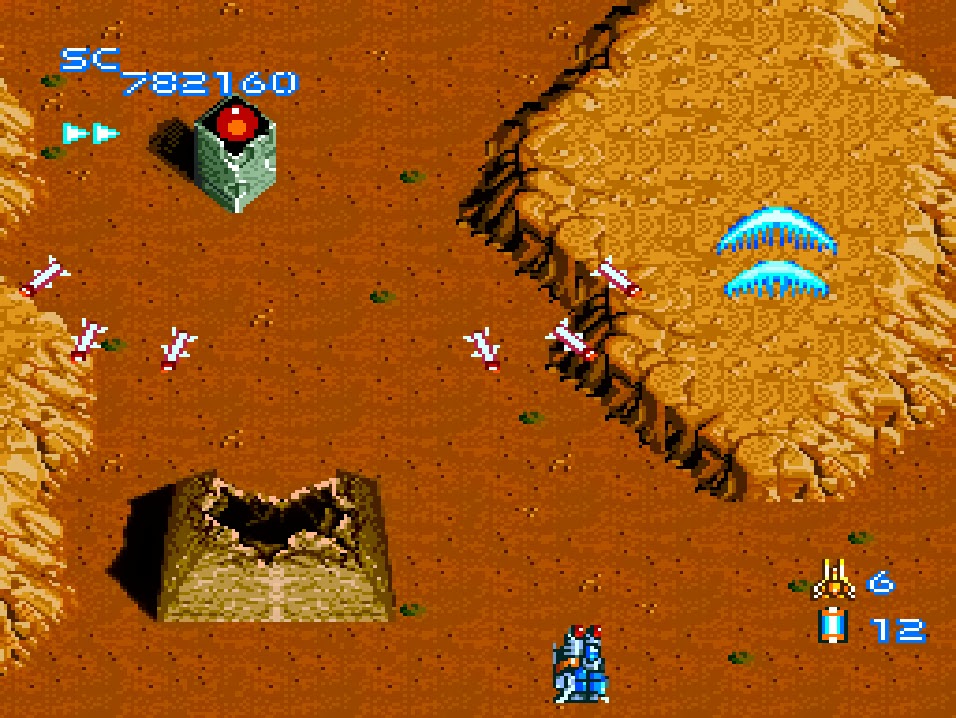 Sample gameplay.  The ship disappearing in places is down to the recording software and not the game.
Posted by Wingnut at 20:53