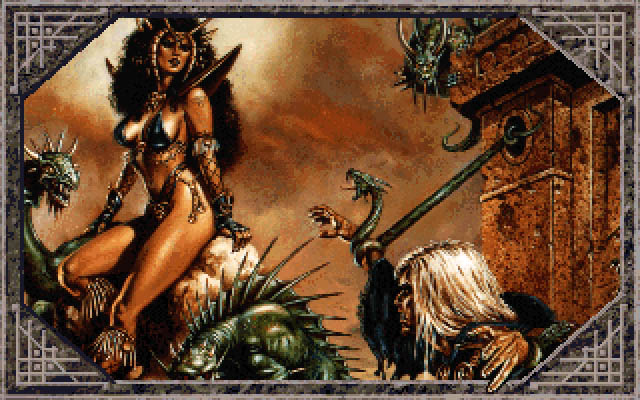 As I've said before, the longer the Gold Box series of games have gone on, the weaker they seem to have become.  They certainly started well enough with Pool of Radiance and Curse of the Azure Bonds, but none of the subsequent games have managed to match them.  Maybe the developers got lazy (it certainly seems so with Secret of the Silver Blades).  Maybe it's more rewarding finding your first +1 sword, being able to afford your first set of plate mail, or casting your first fireball than it is to start a game with god-like warriors.  Whatever the reason, my initial interest in the series has certainly gone off the boil. This culminated in Pools of Darkness which I could not bring myself to finish.  Combat was eminently frustrating and mainly decided on which side cast the first spell.  As my mages had a dexterity of less than 18, I lost out on initiative most of the time.  Having to get rid of your best weapons to cross the planes was the final straw.  I knocked that game on the head.

With the Forgotten Realms games out of the way it's time to return to the Dragonlance setting for the final game in the Krynn series.  In The Dark Queen of Krynn the combat is still challenging but a lot fairer than Pools.  Your characters will be turned to stone, disintegrated and level drained on a regular basis.  They will often be sliced and diced by blade barriers and barbecued by a barrage of delayed blast fireballs.  Even so, the enemy still feels beatable in fights where you are not first off the mark.  And you can keep your good gear.

In a change of format I am playing this game on the PC.  Where there is not much to choose between the sound (what little there is), the PC graphics are displayed in 256 colour VGA.  The Amiga is stuck with 16 colour graphics.

To this end I recreated my party from the last game using the modify function to replicate their stats.  For the first time in a Gold Box game you do not have the option to create a custom avatar.  Instead you are given a selection of 49 pre-drawn characters to choose from. 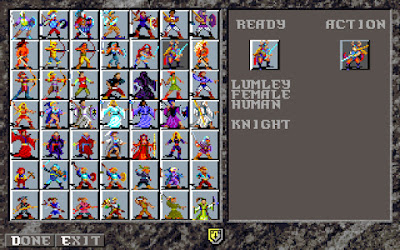 The manual starts with a letter from General Lauralanthalasa summoning you to the city of Palanthas.  This is a menu town where you can go straight to the palace or visit the temple, training hall, shop, inn or bar. 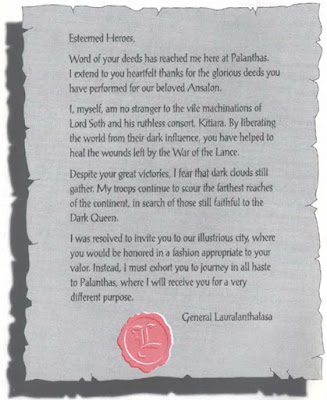 At the palace the General says there have been reports of Draconians gathering in the south.  She urges you to travel to Caergoth to see if the reports are true (won't be much of a game if they're not). 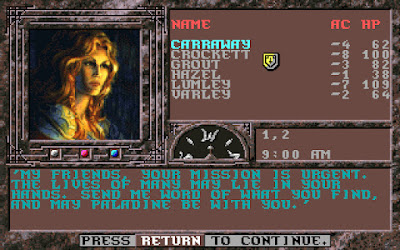 You arrive to find Caergoth a smouldering pile of rubble.  Evidence points to the attack being carried out by draconians and blue dragons.  Indeed, the first encounter is with two blue and one green dragon.  The draconians have already departed taking Crysia, the sister of a sea captain, with them.  You set sail with Captain Daenor in hot pursuit.  I don't remember there being an option to return to Palanthas to report your findings to the General. 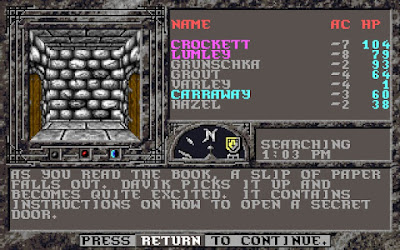 It may not appear strange but I hadn't met anyone called Davik.  I marked the location on my map and reloaded in case this message was a game breaker.  I later found Davik in the dungeons.  A similar thing happened in Champions of Krynn where the game expected me to do things in a certain order.

o   The Enchanted Kapak Draconians are the least powerful and just leave some pools of acid behind when they are killed.  The acid damages both the party and other Draconians.
o   Enchanted Sivak Draconians like to get in close and explode when killed.  Any party member within two squares take a lot of damage.  Other Draconians are not harmed.
o  The green Enchanted Bozaks ‘zap’ anyone who hits them with a melee weapon.  Hasted characters can take a lot of damage this way.  When they die they explode harming any non-draconian within two squares.  They can also cast magic spells such as Lightning Bolts.
o   Enchanted Auraks seem to have two lives.  The first time their Hit Points reach zero they ‘Go mad’.  This causes them to ‘immolate’, sometimes damaging nearby party members.  The second time they lose their Hit Points they 'Rise in a new form' and continue to ‘immolate’ but are unable to move.  After a couple more rounds they explode harming any adjacent PC.  They can also cast spells, favouring Delayed Blast Fireballs.

On top of this, Draconians are somewhat immune to magic.  On average an area effect spell such as Delayed Blast Fireball damages only about 50% of them.  Targeted spells such as Magic Missiles do not always work.   This particular battle took a few reloads.  My best result was one dead character, one unconscious character and one surviving Gnome out of six.  It didn't help that my spellcasters started closest to the enemy.  Long before this fight most of my party were ready for levelling with no training hall in sight.

As the plot moves on you come to realise that the various cities are being infiltrated by Draconians, with the shape-shifters replacing each King with one of their own.  Liberating the Gnomish city of Aldinanchru allowed us to use their windships to cross the lava sea to reach the Draconian power base - The Tower of Flame.


When traversing the Tower of Flame the game likes to tell you which level you are on and prompts you to press return every step.  Every. Single. Step.
At the end of the Tower of Flame are two consecutive battles (no chance to save or rest between).  The battles are tough and after the second one you step into the Abyss.  Why?  I don't know - I didn't have a choice.

The Abyss appears to be empty in all directions and I encountered some tough monsters.  It took a couple of reloads to work out where I was supposed to go which was a square building.  I found some dude called Raistlin Majere chained up and there was another combat.  This time magic did not work and enemies included Enchanted Sivak and Bozak Draconians.  Going toe to toe would have been suicide so I kept moving away (risking their free hits) and peppered them with my meagre supply of missile weapons.  Raistlin explained that the evil god Takhisis had created a portal between the Abyss and Krynn in order to wreak havoc.  The portal could only be used once and would then close.  Again it was out into the emptiness and with no clue which way to go I headed north.  After a while Raistlin (un)helpfully said I should I should go east.  I got there just in time to see Takhisis disappearing into the portal.

The second attempt didn't end too well either.  I took a wrong option somewhere.  Takhisis saw us and killed our arses. 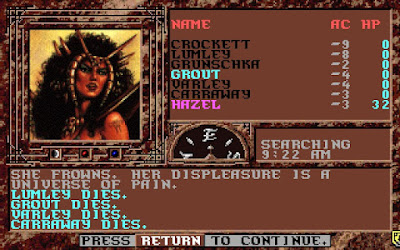 I finally managed to get through the portal but took a lot of damage on the way.  I thought now we had trapped Takhisis in the Abyss the game would end but not so.  I was a bit confused over what happened next.  We met a bunch of gnomes standing around the 'Grathanich' (whatever that is).  They said they would guard us while we rested but they ran off after the Grathanich when it sunk through the floor.  Meanwhile we were left facing a five-headed dragon.  Tahkisis intended to to use the dragon to receive her spirit when she came to Krynn.  It went down quite easily due to the Dragonlance that Crockett was wielding.

After winning that battle I was stuck as to what to do.  After wandering around aimlessly for a while I came across some Draconians communicating with Takhisis via a mirror. 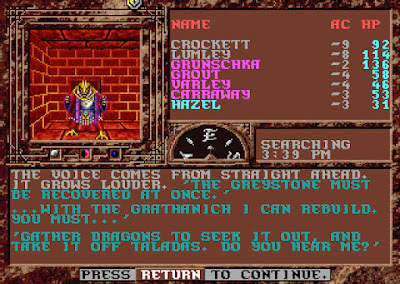 After wandering around some more I gave up and looked at a walkthrough. It seems the Grathanich doesn't re-appear until triggered by an encounter with another bunch of Draconians in a specific place, which doesn't make sense to me.  Where was it in the meantime?

Anyhow, you encounter the Draconians trying to encase the Grathanich in an iron ball. 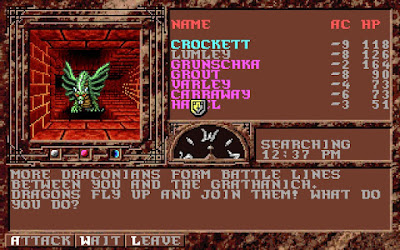 After three consecutive battles against Draconians and Dragons, the Grathanich ends up lost at the bottom of the lava sea.

You are then whisked back to Aldinanachru where it's time to paaartay. 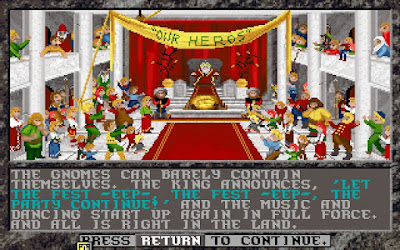 Unfortunately it gets crashed by some dragons we helped earlier. 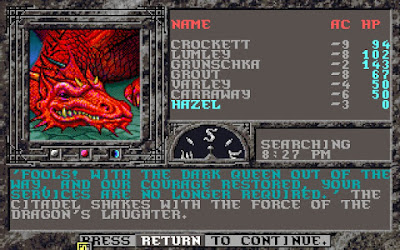 Another battle ensues against a dozen or so dragons.  Although Hazel had died at the Tower of Flame and couldn't be resurrected I managed to beat them on my second go.  Just two characters were (barely) left standing and the game was won. 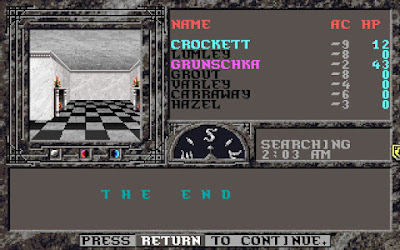 The Dark Queen of Krynn has been criticised for being buggy and a combat-centric hack n’ slash affair.  Personally I didn’t encounter any game breaking bugs and the turn-based combat is one of the series strong points.  There is a varied array of enemies from Black Puddings to Zombie Mintotaurs and whole bunch in between.  Having underwater combat and fights with no magic helps mix things up.  Some fights were difficult (especially towards the end), but the outcome didn’t necessarily rely on who had the initiative which was the main issue I had with Pools of Darkness.  The plot is pretty mundane and there is some padding (eg. Luminari Lighthouse, Hulderfolk Wood, consecutive battles) but overall I liked this game a lot.  A fitting climax to the Krynn series.