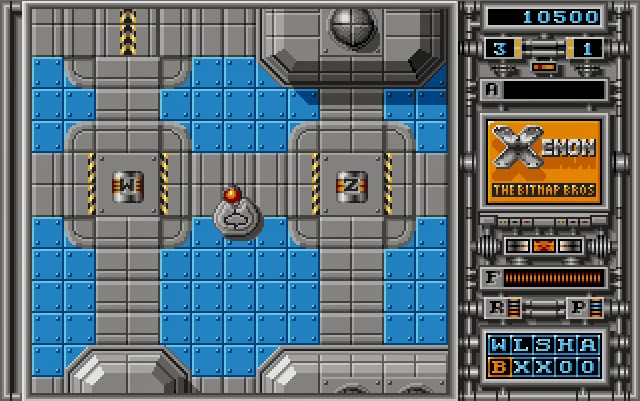 Where the elusive Stamper brothers at Ultimate were content to let their games do the talking, the next group of British programmers to have an effect on me couldn't have been more different.  The Bitmap Brothers burst onto the scene in 1987 promoting themselves as 'rock star' developers and appeared in arty black and white promo photos in their trademark dark glasses.  Fortunately Mike Montgomery, Eric Matthews and Steve Kelly had the talent to back up the hype.  They produced games over several genres with most being very well received.

Early in the days of the 16-bit computers (in the UK at least), a lot of offerings were 8-bit games with tarted up graphics.  The Bitmap's début game was Xenon and was created on the 16-bit machines first.  It was ported less successfully to the PC, Sinclair Spectrum, Commodore 64 and Amstrad CPC.  Xenon was also one of a handful of games to appear on the Arcadia Arcade System, an ill-fated coin-op based on Amiga hardware.

The game initially looks like a rather sedate vertically scrolling shoot 'em.  The first thing to strike you are the crisp, metallic looking graphics of the first level - this was to become the Bitmap Brothers trademark look for their first few games.  To leave you in no doubt who programmed the game, and possibly to massage their egos (indeed the game was originally going to be called Kelly-X), Eric Matthews appears to announce 'Sector One'. 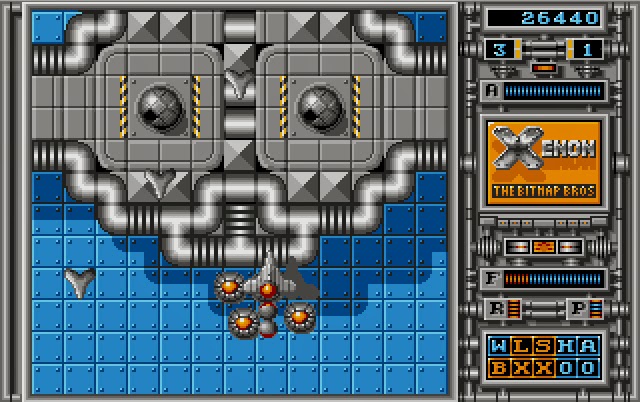 You start the game controlling a ground vehicle that can move and shoot in 8 directions.  Pressing the space bar or a swift wiggle of the joystick morphs the tank it into an aircraft.  The aircraft is more traditional - it moves relentlessly up the screen and can only fire forward.  A lot of the time you are forced into using a certain mode.  Additionally, certain targets can only be destroyed from the ground and vice versa.

You are initially armed with a puny forward firing gun.  Destroyed enemies can release power-up cannisters to enable you to upgrade your ship and it's weapons.  The power-ups have letters on them so you have a choice of what to pick up or what to leave behind. Some of the weapon upgrades are time limited and some, such as the laser, only work when in the air.  Capsules denoted with the letter 'F' replenish some of your fuel supply which diminishes when you are hit.  When your fuel supply runs out you lose one of your three lives.


In total there are four levels and each one features a mid and end of level boss.  Each boss takes a lot of shots to uncover a weak spot, followed by some carefully placed shots to finally destroy it.

Both the ST and Amiga versions sport identical graphics and gameplay.  There is music that plays throughout and it's here that the Amiga's superior sound reveals itself. The chiptune rendition on the ST has it's own charm and almost matches the Amiga for quality so I have included this version on the list.  The graphics are generally good with smooth scrolling and well defined (if formulaic) enemies.  If I had to nitpick, the shadow of the spacecaft slightly spoils the look.  Overall it's a polished and challenging shooter.


Example gameplay from the Amiga
Posted by Wingnut at 06:51