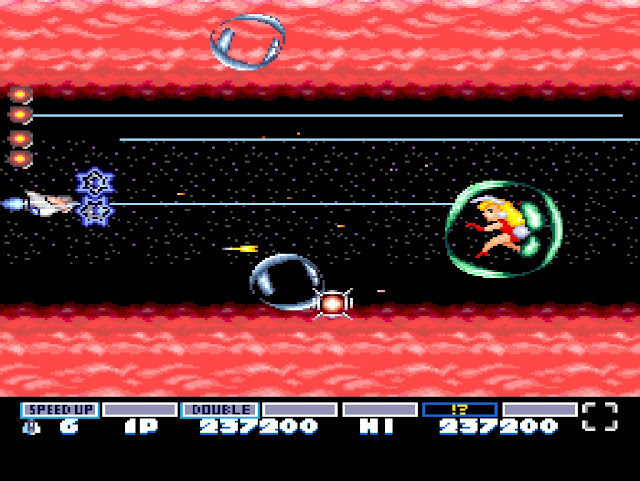 As I've stated a few times before, the Gradius series contains some of my favourite shoot 'em ups.  These games in turn produced a couple of spin-off series - one being Salamander/Life Force, and the second being the rather strange Parodius.  As can be deduced from the title, Parodius is a parody of Gradius.

Parodius first appeared in 1988 on the MSX as Parodius: The Octopus Saves the Earth.  Like the MSX version of Gradius, it wasn't great.  In 1990 Parodius! From Myth to Laughter was released in the arcades.  It is this version on which Parodius Da! is based.

I'd heard of Parodius before but had never seen it in the arcades nor played any of the conversions.  The first time was when it appeared on my shortlist for 1991 for the Sharp X68000.  Comparing it to the original ROM on MAME, it was a pretty accurate rendition.  Even then the mighty X68000 struggled on the second level with quite a bit of slowdown when the screen got busy.  The second level was as far as I got as what really put me off was the insane difficulty level.

Come 1992, and Parodius Da! was released for the PC Engine in Japan (there was no US release on the TurboGrafx-16).  First impressions were not good after playing the X68K version.  The graphics were a lower resolution and not as detailed, and the transitions between backgrounds was not very smooth.  The music and sound effects, although good, paled against the computer.  Compared to the Sharp machine it generally looked a bit rough around the edges.  I soon got used to this, however, and found the PC Engine game more enjoyable (and needless to say, easier).  Just after completing this entry I found a there was a version of the game for the SNES.  It was not on my short-list but I decided to try it anyway. Like the other two conversions it was not released in the US but came out in Europe as Parodius: Non-Sense Fantasy.  Of the three, it had the best sound and most options, and the graphics are almost on a par with the Sharp.  Maybe it's because I played it more extensively I still preferred the gameplay on the PC Engine.
I'd always thought of Parodius as Gradius but reskinned with weird graphics.  To a certain extent I was right - it plays identically to Gradius and the graphics are a bit bizarre - but to label it as such would be unfair.  Parodius builds on Gradius by adding a few extra elements to the game.  The strangeness starts on the ship selection screen.  Your choices include the Vic Viper from Gradius and TwinBee from another Konami franchise, which is fair enough.  Your other choices are an octopus and a penguin. I'm not going to attempt to discover if there is any sort of plot.

After the selection screen you have the choice of whether powerups are applied automatically or manually.  You also have choice of three difficulty levels.  Even the hardest level makes for an easier ride than you'll get on the X68000.

Basic gameplay will be familiar to anyone who has ever played Gradius.  You proceed through each level shooting enemies.  Certain individual enemies (usually coloured red) and waves of enemies drop capsules when destroyed.  Blue capsules act as a smart bomb and destroy all enemies on the screen when picked up.  Picking up orange capsules incrementally highlights items on your power meter which upgrade your ship (or character) when selected.  Besides 'Speedup' and the unfamiliar '!?', all upgrades are unique for each ship.  At the end of each level you are met by a 'pre boss' (such as the volcanoes in Gradius) followed by the end of level boss himself.

Collecting certain capsules turns your power meter red which starts a game of 'roulette' on it.  Pressing the power up button stops it on a random power up.  I try to avoid these because if it lands on 'Speedup' it can make your ship too fast, or it can reduce the power of your main weapon (say from a laser to double shot in the case of the Vic Viper).  If it lands on '!?' then all your powerups are removed and your ship is reduced to the slowest speed.  This also happens if you are killed and can quickly lead to 'Game Over' as Parodius is pretty much a one life game.


In addition to the capsules, certain enemies drop one-time-use bell power ups.  These vary in colour which denotes their effect and you can change their colour by shooting them (though ‘choosing’ a colour is easier said than done).  The most common bell is yellow and provides bonus points.  The points value increases with each consecutive yellow bell.  The green bell increases the size of your character and any options for a short time.  In this state you are invincible but cannot use your weapons.  The white bell equips your character with a megaphone which ‘fires’ phrases in Japanese to damage enemies.  The blue bell equips your ship with a ‘smart bomb’ that clears the screen of enemies.


The sound effects and music are good with speech when power ups are selected.  The main score is based on the music from Gradius interspersed with classical jingles and music from other Konami games.

Overall Parodius Da! is an enjoyable game.  The graphics can be strange and it’s weird playing as the different characters, but underneath it is pure Gradius so I can’t help but like it. 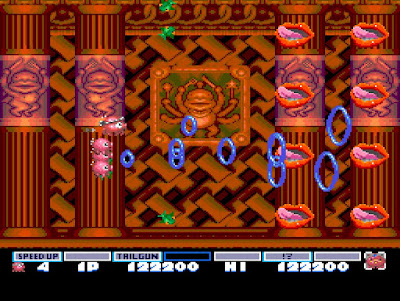