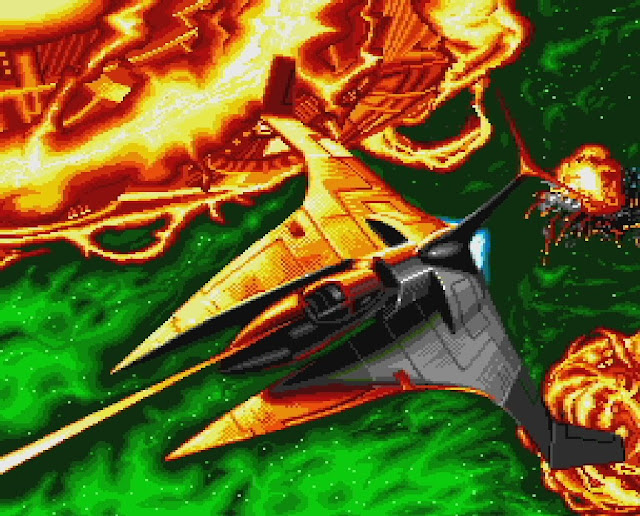 Gradius II: Gofer no Yabou is a conversion of the second title in the Gradius series of arcade games.  It was released on the CD-ROM format some four years after the arcade game.  I have already featured the NES version of Gradius II on my blog.  Where the NES conversion thematically follows the arcade original in terms of graphics, the level layout is completely different.  The PC Engine is a much more faithful conversion with the exception that it contains an exclusive bonus level.

From the options screen you can choose the Game Level from Easy, Normal, Hard and Professional.  Normal is fine for me.  Easy is possibly too easy, but is okay for training (it is the level I did my gameplay video on).  Professional has bullets flying everywhere.  There is a different ending for each difficulty level.

As before, it's just you and your Vic Viper starfighter pitted against the evil Bacterion Empire and it's leader, Gofer.  When you start a game you can choose what weapons your ship is capable of carrying. 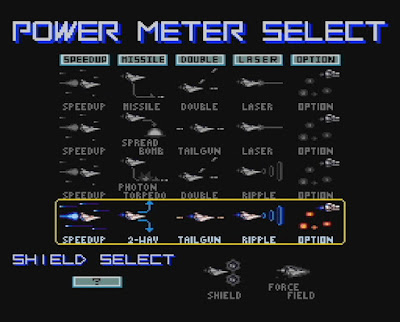 Each selection contains Speedup and Option.  Personally I prefer the fourth choice with 2-way missiles and a Ripple laser, which gives a better spread of firepower than the normal laser.  You also have a choice of defensive upgrades.  The Shield from the original Gradius can absorb the most damage but only protects the front of the Vic Viper.  The Force Field takes less hits before it disappears but covers the whole ship.

Gameplay is the same as the first game in the series.  The screen mostly scrolls right to left although there are some areas where it wraps around in the vertical plane.  Certain enemy formations and individual enemies drop capsules (for want of a better word) when they are destroyed.  Blue capsules act a smart bomb when touched and clear any enemies and bullets on the screen.  Orange capsules add to your power meter.  When the the power meter highlights an item you wish to equip, you can select it and the meter resets.

Music and sound are excellent with the soundtrack streaming direct from the CD.  Where the CD format can't help is with the graphics.  There are flickering sprites in places and massive slowdown when the screen gets busy.  Ironically, the slowdown actually makes avoiding damage that much easier.
The games stages are also varied with some of the enemies and certain areas looking familiar.
My only real criticism is one of the stages features a high speed run which I couldn't get past.  It will take a lot of time and and a lot of practice (or a quick look on YouTube) to work out the optimal route and even then it is all too easy to lose a life.  Which brings up another issue - Gradius II (like Gradius) is a one life game - lose a life and you lose all your power-ups after which it is very difficult to get going again.  Nevertheless, it is a great game and a welcome addition to the ever growing list of Gradius games on my blog. 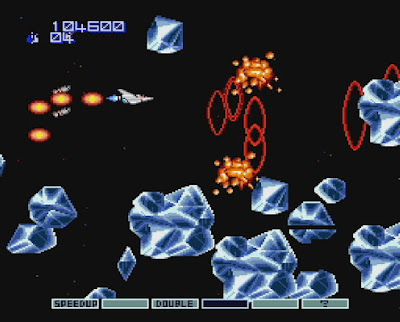