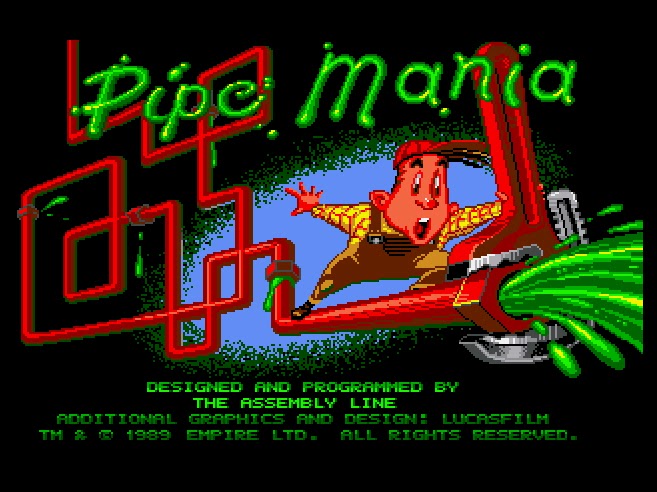 I do enjoy puzzle games so it strikes me as odd the only one on my blog prior to this is a game written in BASIC from 1983.  I'm not keen on games like Solomon's Key or Sokoban where one wrong move can get you hopelessly stuck.  I prefer puzzle games where the game gets progressively more difficult, where reflexes count, where quick wits can help you recover from a seemingly hopeless situation.  Games like Tetris.  Or this.

Pipe Mania was designed in the UK by The Assembly Line who would later program one of my all time favourite shoot 'em ups.  The US publishing rights were bought by Lucasfilm Games who renamed it Pipe Dream.

The 16-bit Commodore Amiga and Atari ST computers are the best versions I have played.  They also have the advantage of being able to use the mouse as a controller.  The Amiga has cleaner sound than the ST so gets the nod.  (The very best version belongs to the Acorn Archimedes but I am not featuring that computer on this blog).

Like all good puzzle games the objective is very simple - connect pieces of a pipe from the dispenser on the left hand side of the screen to make the longest pipeline possible.  The game begins with an empty grid containing only a start pipe.  A bar to the right of the grid decreases and once it reaches the bottom the 'flooz' starts to flow.  By this time you should have the beginnings of a pipe already in place.  The D: counter at the top of the screen indicates how many pieces of pipe the flooz must pass through to complete the level though making it go further means more points.  If the flooz reaches an open end of pipe before the counter reaches 0 then it's game over.

The dispenser is filled with random sections of pipeline and shows the next 5 shapes.  Pipes can be placed anywhere on the grid and you can replace a pipe already laid as long as the flooz has not yet reached it but at the expense of time and points.  At the end of each level points are deducted for each unused section of pipe left on the grid.

After every 4 stages you get a password and a bonus level appears.  On the bonus level a section of pipe moves back and forth across the top of the screen and can only be dropped downwards.  The goal is just to make the longest possible pipe for extra points - there is no minimum length here. 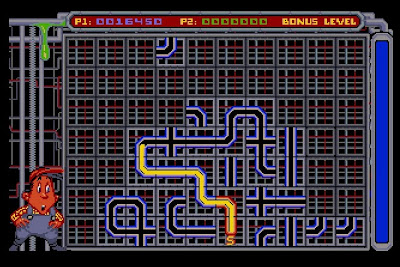 On later levels there are obstacles in place which you cannot build on.  Special sections of pipe also crop up such as bonus pieces (you get extra points for directing the flooz through these), reservoir pieces (slows down the flooz), and one-way pieces.  Sections of the grid wall can also be missing to allow the flooz to flow from one side of the grid to the other.  Still later end pieces appear where the pipe must terminate after being built to the required length.  The flooz also moves faster as the game progresses. 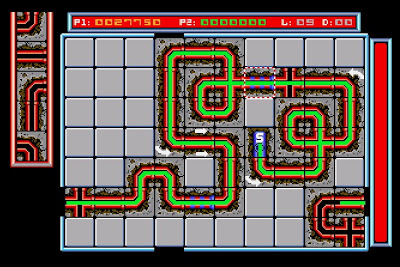 I remember having this game on the Atari ST.  At the time a puzzle game was not something I would have spent my hard earned money on so it must have come on a compilation or been a budget buy.  Pipe Mania is not a game where great graphics and sound are needed (although some levels are a bit garish) and it remains as addictive today as the day it was released.