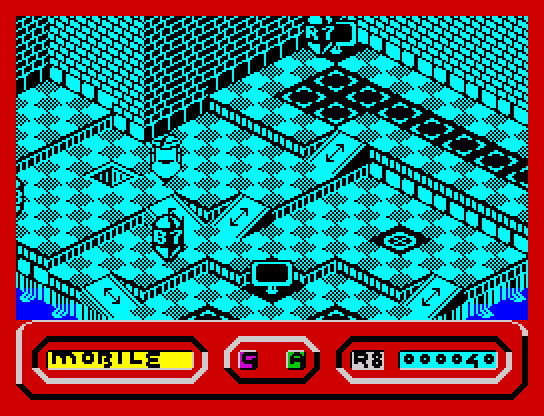 Basically, Quazatron is Paradroid for the Spectrum.  It was written by Steve Turner who took the gameplay from Andrew Braybrook's Commodore 64 classic and moulded it onto an isometric landscaping engine he had been working on. It was decided the graphical limitations of the Spectrum meant it was not suited to running a straight port (and they were probably right!).

Your aim is to destroy all the hostile alien droids in the underground city of Quazatron on the planet of Quartech.  You take control of a droid called KLP2 (or ‘Klepto’) which has capabilities similar to the influence device from Paradroid. The enemy robots vary in power, armour and weaponry.  This is denoted by the digits they carry - the letter shows the type of droid and the number indicates the power (1 is the toughest, 9 the weakest). You can damage the hostile droids by ramming them, shooting them, or pushing them off ledges.  You can also scavenge them for parts by grappling with them.  If you put Klepto into grapple mode and ram another robot it brings up the same mini game found in Paradroid.

You need to fire ‘pulsers’ across a circuit board to change most of the central bar to your colour.  A successful grapple allows you to remove parts from a defeated droid including power and drive units, weapons, chassis and any special devices it may be carrying.  Some parts may be damaged during the grapple; a more decisive victory means more items will remain intact and usable.

Moving around the play area, shooting and ramming robots takes energy.  How quickly power is consumed depends on the parts you have scavenged e.g. energy is rapidly used up if a heavy chassis and powerful weapon are combined with weak power and drive units. Klepto's energy level is denoted by his expression.  Happy is good but when he starts to look glum it is time to search out a recharge point or grapple another robot.

Once a level has been cleared of droids the lights go out and it is off to the next.  You can travel between levels via lifts.  Consoles are available which can be accessed to display a map of the current level, a plan of the levels and a database of robots. The map shows the location of lifts, charging points and other consoles.

Although Quazatron is a good game, it has several issues that prevent it being as good as Paradroid.  The main problem has to be the scrolling which is slow and quite jerky.  It is not as noticeable when you are concentrating on the game but is still annoying. Controlling Klepto can be quite difficult too when negotiating the terrain while trying to chase down another robot - I put this down to the isometric viewpoint.  Another problem is when ramming or moving to a new level, a droid can sometimes become 'stuck' to Klepto, which can quickly drain your power or kill you if you are already low on power.  I would say the sound is above average for the Spectrum with some short tunes and decent effects.  Despite the criticisms I still like the game a lot  and think it deserves a place on my list.