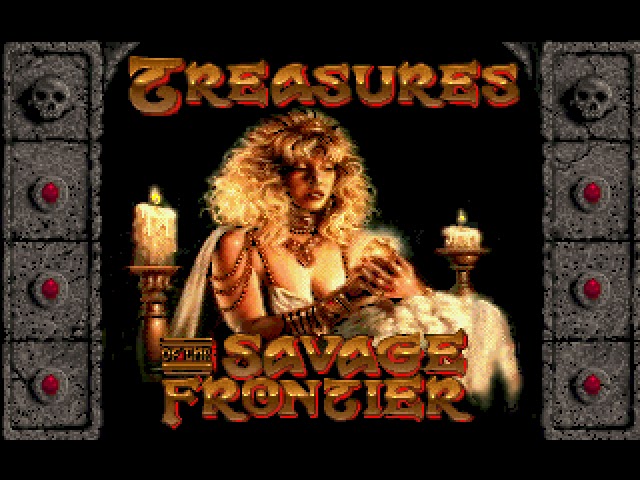 Treasures of the Savage Frontier marks the end of the road for SSI's Gold Box engine.  It has given good service over the nine AD&D (and two Buck Rogers) games starting with Pool of Radiance in 1988.  There have been a couple of hiccups along the way, but for the most part the series has been very good.

This game is the follow up to Gateway to the Savage Frontier released the previous year.  The main things I remember about Gateway was the step backwards the Gold Box engine took and the contrived ending.  This time I am playing the DOS version as the VGA graphics are a big improvement over the 16 colours displayed on the Amiga.  Things got off to an inauspicious start when I had to create my party using the awkward character designer.  Picking the icons was so much easier in The Dark Queen of Krynn.

Indeed, it seems like Treasures of the Savage Frontier used a Gold Box engine several versions older than the last couple of games:-

The manual says that Amanitas has magically transported your party, the Heroes of Ascore, to the city of Llorkh.  Zhentarim survivors from the last game are battling the resident dwarves for control of the city.  You have been summoned to aid the dwarves in defeating the Zhentarim and are then to visit Amanitas in Secomber.

Amanitus was the mage in Gateway to the Savage Frontier  who told us where to go next.  He does this again but this time we can communicate with him via a magic crown so we don't need to travel to Secomber each time we complete a task. 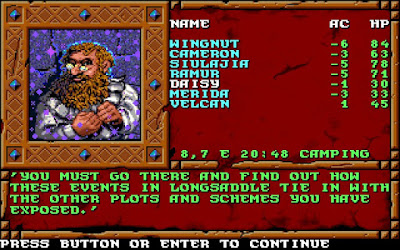 As the game goes on it is revealed that the Zhentarim, Hosttower Mages and the Kraken society have joined forces with the goal of taking over the region.  The Lord's Alliance is made up of a dozen cities who have grouped together to combat common threats in the area.  The evil union is intent on breaking up the Alliance using kidnapping, deception and subterfuge to set the cities against one another.  They have also framed the Heroes of Ascore as traitors. 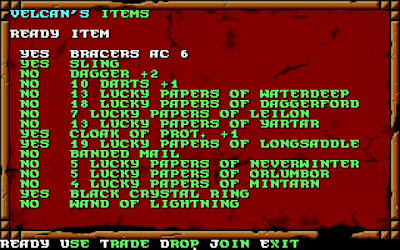 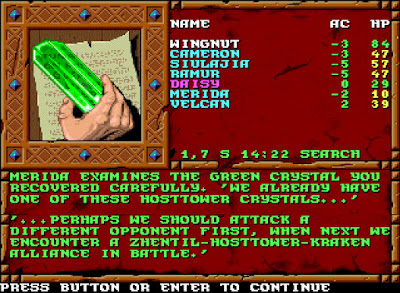 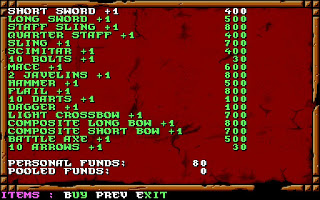 After completing quests in all the cities it was off to Mirabar to meet with the Councilors of the Lord's Alliance and to prove our innocence.  This brought up the usual end game screens with pages of reading... 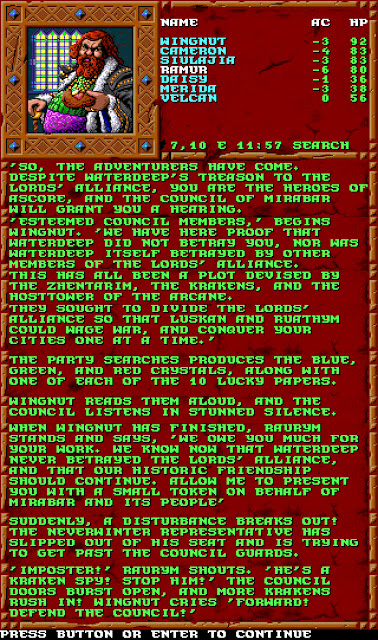 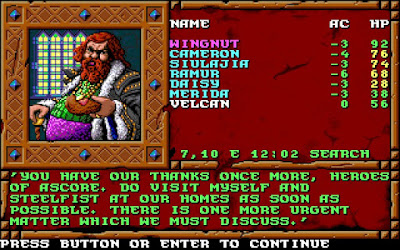 What came next seemed disconnected from the main quest and felt like it was tacked on afterwards.  We were tasked with retrieving a magical gem from the hoard of a long dead (yeah, right) dragon.  This was to be found in Ice Peak in the far north of the overworld map.

The dragon's lair was located in a maze-like area on the far side of a one way door - once in you can't get out. 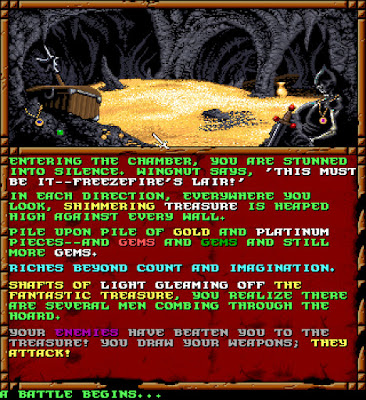 Alas, I was unable to finish the game due to an impossible penultimate battle.  You are attacked by three groups made up of blackrobed mages, spies and masters.  The blackrobed mages and blackrobed spies always get the jump on you and have a propensity for casting hold monster and hold person spells.  The blackrobed masters finish off held characters and disrupt my mages spells.  I'm lucky if I can get through the first round with half my party able to move.  Having a hasted party, invisible characters, and even turning the level down to Novice makes no difference to the outcome.  After many failed attempts I watched a couple of 'Let's Plays' on YouTube to see how it was done.  The videos showed the players being attacked by two groups of four and one group of five.  I had this... 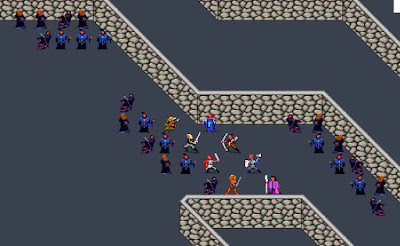 Thirteen opponents would have been doable, twenty-five were not.  If anyone has any ideas please let me know*.

Although I couldn't complete the game I did like it.  Contemporary reviews weren't very kind calling it more of the same.  This is fine by me as I like the series.  Also, I found Treasures of the Savage Frontier was refreshing as it took us back to where Hold Person and Stinking Cloud spells still worked and my starting characters couldn't yet cast Fireballs. 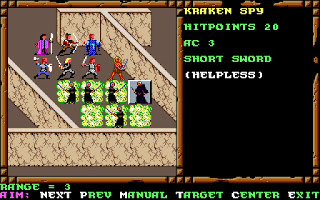 It was not quite the fitting end to the series I had hoped for but I still enjoyed it.  Here's hoping SSI's Dark Sun engine games are just as good.

After finishing writing this entry I did go on to complete the game.  I needed to load up my final save just to confirm the names of the enemies in the 'unwinnable' battle so I didn't bother buffing.  I decided to have a go anyway and was lucky enough to get off two fireballs before the enemy started to cast, so disrupting most of their spellcasters.  Their first volley of 'holds' only affected a couple of my party.  Some friendly dwarves and extra enemies turned up and I eventually won with only three dead characters.  The end game.... 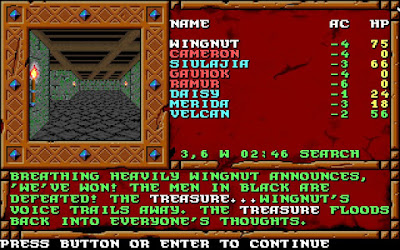 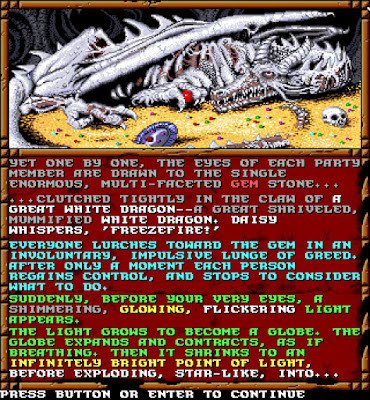 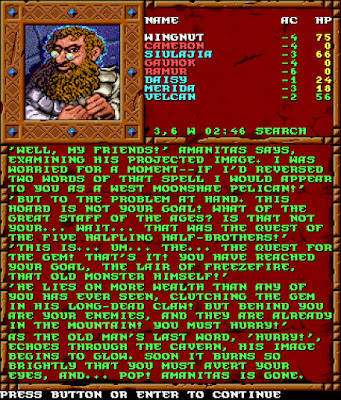 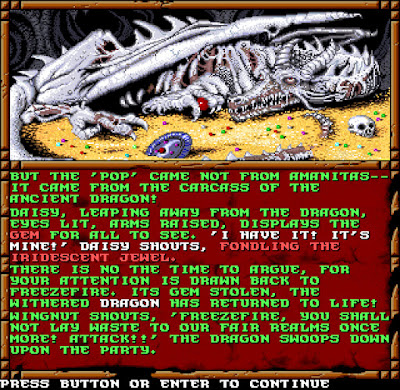 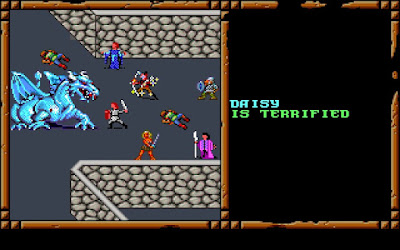 Having no chance to rest or heal we were thrown into a battle against Freezefire.  This was an ancient dragon that once terrorised the realm.  After the last battle it was disappointingly easy.  Although it had a -8 AC, it only had 56 hit points and was not immune to magic.  It went down within two rounds managing to hit only one accompanying dwarf with some kind of cold attack. 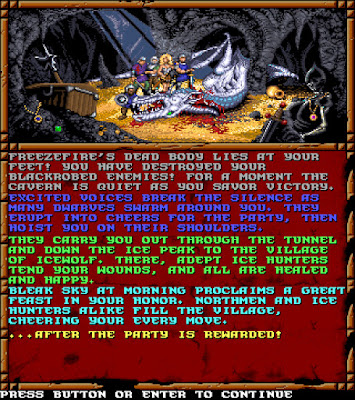 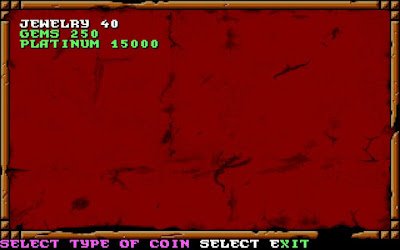 "You do realise this game doesn't have a sequel don't you?" 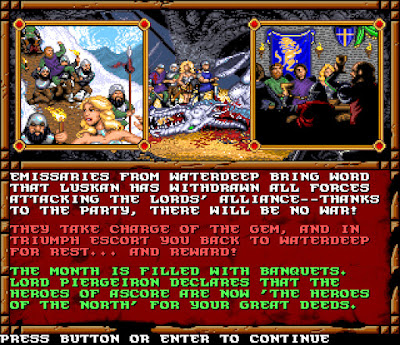